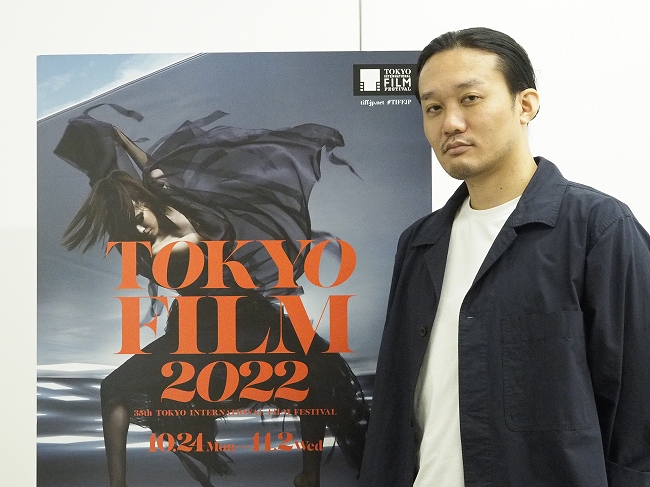 Director Fukunaga Takeshi is now 40 years old. He was born and raised in Hokkaido, he moved to the U.S. after graduated from high school to study film at Brooklyn College of The City University of New York. In 2015, his first feature-length fiction film Out of My Hand was selected for the Panorama section of the 65th Berlin International Film Festival and won “U.S. Fiction Award” at the 21st Los Angeles Film Festival. His second film AINU MOSIR (2020) won the Special Jury Mention in International Narrative Competition at the 19th Tribeca Film Festival. This time, Mountain Woman was selected for competition at the 35th Tokyo International Film Festival for the first time, which was inspired by “Tōno Monogatari” by Yanagida Kunio, and same as AINU MOSIR, and he assembled a team of national and international staff to create a work that exceed his own imagination.

This is your first time selection for the TIFF competition. This work can be said that it aims for greater than previous films while sharing elements in common with your previous feature-length films?

Director Fukunaga Takeshi: I didn’t really think about the relationship with my previous works, but I am still conscious of portraying minorities same as before. So, I think that similar elements come into the film naturally.

When the film begins, the subtitle “Late 18th Century Tohoku” appear on the screen. How much was this film inspired by “Tōno Monogatari”, a classic of Japanese folklore published in the first half of the same 18th century?

Fukunaga: It was influenced by the novel greatly, this film is not based on “Tōno Monogatari”. Although, I drafted a new story by incorporating various elements from the folk tales featured in the book. On the other hand, the legend of Mt. Hayachine told by Rin (Anna Yamada) and the legend of the flooded river told by grandmother are quoted directly from “Tōno Monogatari.”

When did you start writing the script?

Fukunaga: It’s 2019. After writing the first draft myself, I invited playwright Osada Ikue, who has written several historical dramas, to co-write the script. After that, I attended the NIPKOW Program* in Berlin, and I was supposed to stay there and write the script with the advice of instructors, but because of the Covid 19, I was unable to go, so I sent the script in English and received help from an instructor online. I then finished the script in Japanese with Osada Ikue, asking for her opinion on the historical background of the film.

Why do you consistently get feedback from foreign people when writing the script and work with foreign staff?

Fukunaga: I aim to create works that clearly convey the story without any prior knowledge by referring to feedback from people overseas. Since I studied filmmaking in the U.S., I feel that it is easier to work with overseas staff. By bringing together people with various backgrounds and sensibilities, films can develop into a form that is different from what I had envisioned. I enjoy this process, and I have the expectation that by doing so, I will be able to create a film that exceeds my own imagination. Of course, I am not saying that I will only work with overseas staff, but I think it is important to have an international film production team in order to create the production environment that I am looking for.

Every actors, including Yamada Anna who played Rin, Nagase Masatoshi who played her father Ihei, and Mirai Moriyama who played the mountain man, acted brilliantly and the whole ensemble was outstanding, how did you choose them?

Fukunaga: The selection of actors were largely due to the efforts of three members of the producer team, Eric Nyari, Miyake Harue, and Ietomi Mio. In
previous works, we had asked non-professional actors to perform, so we looked for actors who could be equally be immersed in the world of the story and show a realistic sense of existence.

These days, it is rare to have Japanese film in which the dialect is used completely.

Fukunaga Learning the Tono dialect was the most important thing I asked the actors to do for the preparation. Words are condensed with the atmosphere and texture that can only be found in that region. I thought this was a very important element to give a sense of reality to a period piece with strong fictional elements.

As the film portrays the harsh climate suffering from cold damage, the reality of poverty, which is cruel from a modern perspective, is captured, and the customary discrimination and male chauvinism of the village are presented to the viewer.
These are problems that are happening in modern society in a different form, aren’t they?

Fukunaga: There is also that, and more recently, what happened with the Covid 19. In the early days of the corona epidemic, it was very sad to see so many cases of infected people being blamed in Japan. The composition of people being hunted down and blaming weak individuals has been repeated many times in history. I wrote this script while I was watching and listening to the news about the pandemic, so the story naturally reflected what was happening at the time.
Also, this film features a female protagonist and depicts male-dominated customs. Even though it is a fictional period piece, I felt that we must not portray women in the wrong way, so I had as many female staff members as possible to participate in the film. Through many discussions with co-writer Ms. Osada and the producers, we were conscious of making this film a work that is still relevant to today’s Japan, where male chauvinism continues uninterruptedly.

Fukunaga: First of all, it is meant to be a place where Rin can be released in search of a place. The feeling of awe toward nature has been passed down in the hearts of Japanese people since ancient ages, and it is an important part of the unique Japanese spirituality. In the film, nature is portrayed as something harsh and frightening, and I wanted to express the relationship between humans and nature that is unique in Japan. The nature scenes are very symbolic and have an important meaning.

*NIPKOW program: The program is targeted at international film and media professionals in the form of script residencies. The program offers a maximum of three months at a film residence in Berlin, with monthly subsidized living expenses, one-on-one instruction to meet the needs of the residents, and a variety of customized seminars on packaging, promotion, sales, new technologies, etc. This was established in 1992.
previous
TIFF Talk: The Challenges of Overseas ...
2022.10.30 [Interviews]
next
The meaning of the word “egoist” – ”Eg...
2022.10.31 [Interviews]