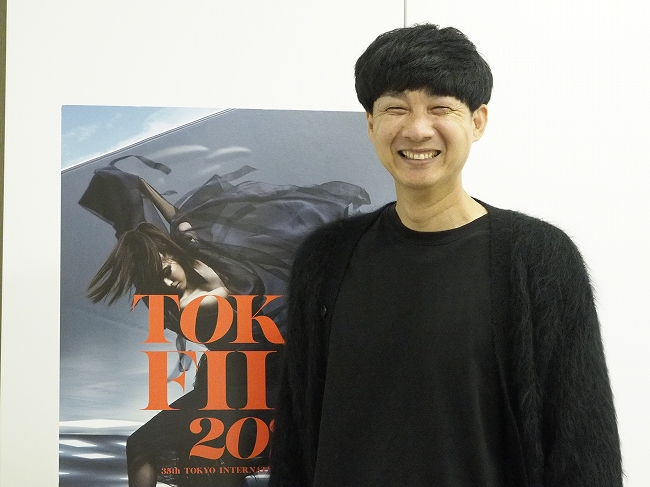 Japanese film director Matsunaga Daishi has been producing films smoothly since he released Pyuupiru (2011), the documentary film about a title-name contemporary artist as well as transgender. Pieta in the Toilet (2003)won numerous awards, and Hanalei Bay (2018),based on a short story by Murakami Haruki,turned out to be a beautiful movie starring Yoshida Yoh and Hawaiian scenery.
And now, the latest film Egoist features Kosuke (Suzuki Ryohei) as a protagonist, an editor of a fashion magazine,who lost his mother at the age of 14. He has kept his gay identity aside until he meets Ryuta (Miyazawa Hio), a personal trainer, who works to support his lonely mother. The two, attracted by each other, start spending a rich time together…
The film reflects a variety of forms of love in the same-title novel Egoist by Takayama Makoto, in both physical and spiritual ways.

What were the key points that made you want to make it into a film after reading the original novel? Also, how did you encounter this original novel?

Director Matsunaga Daishi: It started from an offer given by Akashi Naomi, our planner and producer, to make a film based on the novel. I’ve known her since I released my debut documentary film Pyuupiru, She had seen the film and told me it was interesting, and we talked about making a film together someday. Pyuupiru also involved gender and sexuality, and I thought this original novel had other themes that I found very interesting.

You mean by the theme,“whether love is selfish”?

Matsunaga: While this novel expresses the homosexuality as one of the most important themes, in broader sense, I thought it would be interesting how we view the love of family in love with others.

Was Suzuki Ryohei a candidate for the role of Kosuke at the first point or was there an audition?

Matsunaga: Regarding casting, I make decisions with the producers in all of my films so far. This time, I was concerned about the balance among the main three characters, and it ended up being Suzuki Ryohei as Kosuke, Miyazawa Hio as Ryuta and Agawa Sawako as Ryuta’s mother.

It was interesting to see the composition of the picture when Agawa stood in the middle of Suzuki and Miyazawa, the two tall men, when everyone took a picture in the film.

Matsunaga: Although it’s just a coincidence, I tend to work with tall people. But it doesn’t mean tall people are simply better, rather I think it’s a part of a character, including their body build.

The scene at the Izakaya, or Japanese pub, where Kosuke was drinking with his friends, was quite documentary-like.

Matsunaga: This entire film was basically shot hand-held, each scene with a single cut. That scene likewise, I shot in three or four sets of 20 minutes.
I had been discussing it with the director of photography even before we started shooting. We rehearsed using the actual camera, lightly edited it, and rushed it in the screening room, then we finally started the shoot.

It is very meticulous.

Matsunaga: Yes. Well, this was my first time shooting this well. But basically, I do a camera test every time and review it on the screen before starting the shoot.
Japanese films tend to rush through once they start shooting. That’s why I prefer my way, so that I can concentrate on directing rather than discussing on the sets how to shoot and so on.

Not so many film directors are particular about that, are they?

Perhaps because Kosuke is an editor of a fashion magazine, there were many outfits in his closet. Was that your instruction? Although, it was only shown partly that only some audiences could notice…

Matsunaga: It is our job to be precise about details for sophisticated cinema lovers. Sometimes we cannot do everything perfectly due to the limited budget and time, however, in the case of Kosuke’s character, his outfits were especially important. I tried as much as I could do, not only with the clothes but also with the other details as well.

Drawing back to your mention about the scene of Kosuke and his friends as documentary-like, Suzuki seemed to be getting into the act and enjoying himself.

Matsunaga: I agree. Actors’ acting generally starts from script, then movement, and lastly they make it into a natural process, but sometimes, I wait enthusiastically to shoot some real improvisation of them. In Egoist, I challenged myself to see how I could make it happen.

In your films such as “Pieta in the Toilet”, “Hanalei Bay”, and also in “Egoist”, death is always close at hand. Are you conscious of that?

Matsunaga: I just realized that, even though I make it myself, death appears every time. “Death” is too absolute to set as a theme, so that it happens to turn out to be a negative sometimes. I myself have also had the experience of feeling death closely since I was a child. I believe “death” is both special and not special. Our way to face death might be different for each.
In terms of this film, I think it would be good if it works positively for those who are left behind, rather than ending sadly. It may be idealistic, but I would like to believe that, after a period of time, there is something positive about it that those left behind can see it as something positive.

How do you want the audience to watch this film?

Matsunaga: When Pyuupiru was invited to various film festivals, I found that the perception of gender and sexuality was different in each country, and I also felt that the situation in Japan was outdated.
I am interested to see how the audience and jury members will perceive the film, since I faced sexuality squarely in this Egoist, based on my feelings at that time. This is true not only for the international jury, but also for the Japanese audience. I hope that this film will lead to discussions on each of these ideas.

I think this year, the films by the three directors in the competition capture the characters who stands a little far away from the ordinary. Though it is hard to determine what normal is.

Matsunaga: I believe that the films are entertainment, but also tools to inform messages that include social aspects in it. There are people in this world who discriminate against others unconsciously or unknowingly because they don’t know what it is. So I would be happy if the people who watch this film can learn about what they don’t know or if it gives them an opportunity to think about it. Almost no one would intentionally engage in discrimination. I think it is unfortunate that the discrimination still happens.

Lastly, do you still think love is ego?

Matsunaga: That is ultimate question, and I feel I shouldn’t answer it.
However, one of the main reasons I decided to make a film of this original novel was the dialogue of Taeko, acted by Ms. Agawa who says, “We who receive it feel it is love, so that’s okay.” When I read this phrase, it really resonated with me. The most important thing is how the people involved feel about it. These days, people who are not involved say this or that about someone else’s actions. There are things that can only be understood by the people who are involved, and it is not good for others to draw conclusions about them. The world today is very suffocating. I feel like I have to be always innocent. I don’t know if everyone in the audience can relate to this, but the way the main character, played by Mr. Suzuki, is in love, it is enough if he thinks it is love. Others should not conclude that “your love is ego.”

Actually, when I watched it, I didn’t think it was egoist at all. But when I think about the title again, I thought there is an idea of egoist.

Matsunaga: I want everyone to think about the meaning of the word “egoist” one more time. I have showed the title on the screen again at the end of the film with this meaning in mind. This word gives a negative image, but when you finish watching the film, can you deny this way of pouring out love by the main character? And I think there is a possibility that the meaning of the word “egoist” will change, even if only a little.