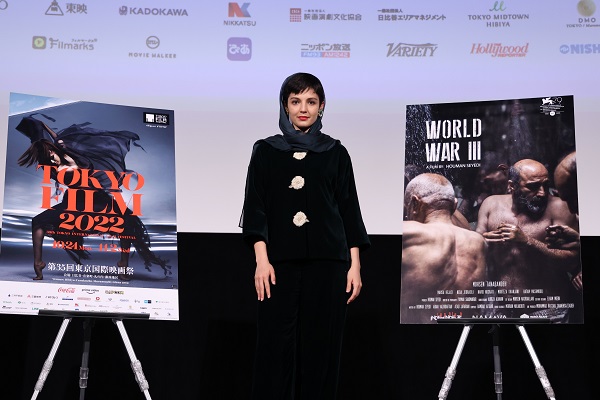 It seemed appropriate that World War III, a Competition selection of the 35th Tokyo International Film Festival, was screening on Halloween, since it is at least partly about dressing up in costume and acting like somebody else. In the movie’s case, that somebody else is Adolph Hitler, who is the central character in its film-within-the-film.

A lowly day laborer named Shakib (Mohsen Tanabandeh of A Hero) gets a job building and guarding sets for what looks to be a fictional World War II drama, before he is suddenly and literally thrust into the role of the German dictator when the main actor falls ill. But rather than focusing on how Shakib interprets his part-time identity, the film is more concerned with how he reacts to it given his increasingly desperate circumstances.

Unfortunately, the acclaimed Iranian director of World War III, Houman Seyedi, was not in Tokyo for the post-screening Q&A session. “He was not able to be here,” actor Mahsa Hejazi, who plays Shakib’s deaf lover in the film, told the audience. “That was not his intention, but he couldn’t leave Iran.”

According to the Director’s Message in the official TIFF program, Seyedi wanted to address the kind of power balance that exists between authority and the masses in societies led by oppressive regimes, and Shakib clearly represents the part of society that has nothing. Left homeless by an earthquake, he stumbles from one dirty day job to another until, through no effort of his own, he lands the Hitler gig.

But he is not suddenly treated like a star. The production crew still considers him a worker to be bullied and pushed around, even if he is indispensable to the project. This dynamic works on Shakib in strange ways, and as the movie shifts from black comedy to something like classic tragedy, the film set itself takes on the trappings of a little dictatorship, with Shakib becoming more desperate and angry.

One audience member commented on the “ethical” aspect of the film-within-a-film, which takes place in a concentration camp and shows the wholesale slaughter of Jewish prisoners. He wondered how the director prepared the actors for such an extraordinary undertaking. Hejazi could only speak about her own experience on the film. “We talked a long time before we started shooting,” she said. “[The director’s] image of my character was something like Anne Frank, but mostly we talked about the background of my character and why she wanted to escape her situation. Five minutes before shooting every scene he would always talk to me about my character, which was very helpful.”

Another audience member wanted to know what led Shakib to do the things he does at the end film, as well as how the young woman played by Hejazi could have a relationship with a middle-aged man. The actor, limiting her comments to her character’s relationship with the protagonist, explained, “In the beginning, he just wanted to escape life, and that’s what [my character] fell in love with. His appearance did not make any difference to her.”

Moderator Ishizaka Kenji, TIFF senior programmer, was impressed with Hejazi’s facility with sign language and asked how she had prepared for this aspect of the role. “I only knew a little bit about my part in the beginning,” she admitted. “When I first got the script, I just read the lines as they were written, but then the director told me I would be using sign language. I had to work with an instructor for four months. It wasn’t until after that that I was able to see the whole script.”

One of the lighter scenes in the film is when Shakib is forced to shave his beard before assuming the likeness of his character, and one audience member asked Hejazi if she preferred him with the beard or without it. The audience laughed. “It wasn’t just him shaving his beard,” she said. “But him wearing that Hitler mustache. I think he went through a lot for this film.”