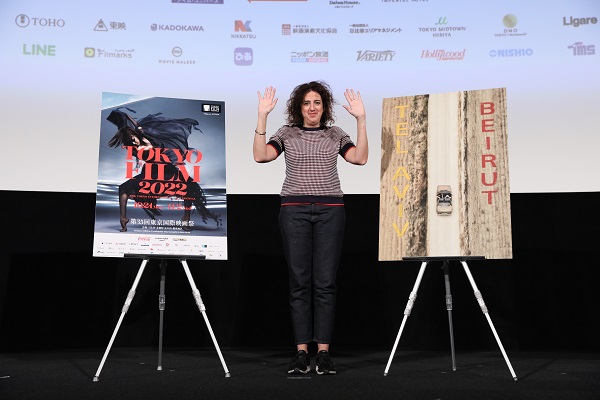 Writer-director Michale Boganim fielded questions from the audience on October 31 following a screening of her political drama, Tel Aviv Beirut, a World Premiere playing in the Competition section of the 35th Tokyo International Film Festival.

The film is set against the backdrop of the onset of the Israeli-Lebanese conflict. Lebanese soldier Fouad is a collaborator for the Israeli army and close friend of Israeli soldier Yossi. During the course of the war, Yossi’s wife, Myriam (Sarah Adler), raises their son essentially by herself in northern Israel for 17 years, while Fouad loses his own wife to a friendly-fire Israeli missile strike.

When the Islamic group Hezbollah comes to power in 2000, Yossi and the occupying Israeli soldiers beat a hasty retreat, leaving their collaborators behind. Upon being branded a traitor, Fouad flees to Israel with his reluctant daughter, Tanya (Zalfa Seurat). Yossi does little to help his former friends when they arrive, and the two are forced to live in an exiled state, unable to return to Beirut but also not accepted in Tel Aviv.

Years later, a new war between the countries ignites when two Israeli soldiers are abducted at the Israel-Lebanon border. Fearing that one of the abductees might be her soldier son, Myriam decides to search for him. When she hears that Tanya lives in one of the towns that her son is potentially stationed in, Myriam enlists her to help her cause. During the course of their road trip along the border, the two bond over shared familial pains from the war’s devastation.

While Tel Aviv Beirut is ostensibly a war film, its drama revolves around the effects of war on those least responsible for it: women and children. Myriam and Tanya represent the real consequences of endless bombings and raids.

“I wanted to show there were victims of this war other than men,” Boganim told the audience, “and that they were in fact paying a bigger price than the men.”

Boganim explained that since the film’s budget was not large, the crew had to be creative with portraying the war. This ingenuity comes across particularly through its skillful use of sound, with gunfire, explosions, and blaring emergency sirens ringing constantly throughout.

The film also pays close attention to set design, with carefully composed shots of shellacked buildings filmed through cracked glass windows. As the warzones in the conflict are set in homes and communities, the audience is left with the feeling that the potential for explosive violence is a part of everyday life.

At the same time, Tel Aviv Beirut excels at portraying moments of intimacy and vulnerability, exemplified by the therapeutic car ride between Myriam and Tanya in the film’s third act. In one scene, the two stop their pursuit and find common ground while leisurely swimming in a small creek.

“I wanted to show their bodies in the water,” explained Boganim. “They don’t hear the sounds of the war. It’s just a moment of beauty.”

The film’s style also benefits from a diverse and melodic score composed by Avishai Cohen. Boganim said she is a big fan of his music and knows the composer personally.

“We were writing the music together, and most of it was composed for the film,” said the director.

The collaboration went so well that Cohen asked Boganim for a part in the film, which she obliged by casting him in a small but magnetic role as a love interest for Myriam.

While Tel Aviv Beirut shows the conflict from both sides of the Israeli-Lebanon border, the film was shot mostly in Cyprus. Boganim explained that this was so they could cast Israeli and Lebanese actors in the same film for the first time.

“Lebanese actors cannot go to Israel and the Israeli actors and I cannot go to Lebanon,” explained the director. “So Cyprus was a way for all of us to gather in a neutral place.”

This idea of the impossibility of border crossing is also represented in one of the film’s most powerful scenes, where the casket of a dead Lebanese person is passed to his family at the Israel-Lebanon border.

“Only dead bodies can cross the border, which is quite sad,” said Boganim.

Tel Aviv Beirut casts a sharp critical eye towards the treatment of the Lebanese refugees by Israeli society, but provides no easy answers.

“I hope people will understand better the conflict in the Middle East and its complexity,” concluded Boganim. “I hope one day this conflict will end and there will be peace.”