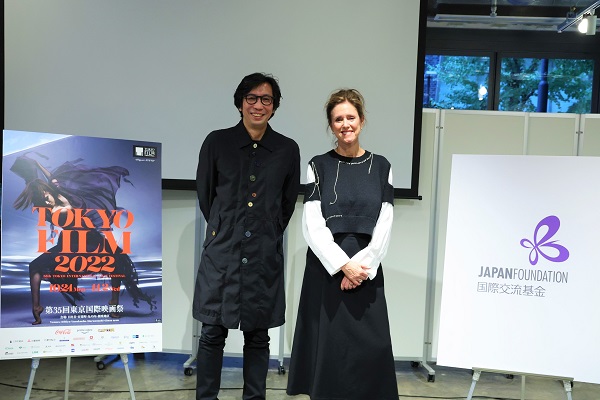 In a discussion that was far too brief, the renowned theater, opera and film director Julie Taymor (Frida, Across the Universe) and Japanese stage and film director Yukisada Isao (Go, Theatre: A Love Story), chatted about high art, low audience expectations and much more at the Yurakucho micro Food & Idea Market on November 1.

Co-presented by The Japan Foundation and the 35th Tokyo International Film Festival, where Taymor is serving as President of the International Competition jury, the TIFF Lounge event began with a video compendium of highlights from some of Taymor’s extraordinary productions on Broadway and elsewhere, including “The Lion King,” “Spider-Man: Turn Off the Dark,” “A Midsummer’s Night’s Dream” and “M Butterfly,” as well as clips from her latest film, The Glorias.

Yukisada began by admitting he’d been surprised at the invitation to speak publicly with the American creator. “I never dreamt I would be given a big role like this,” he said, “and I’m a bit nervous to talk with such a renowned creator in the film and theater industry.”

Protesting that the honor was hers, Taymor told the audience, “If you’re familiar with any of my works, you know how important Japan has been to my life and career. I first came when I was 21 or 22 on a traveling fellowship in Visual Theater, visiting Eastern Europe, Indonesia and Japan. I would say that Noh, Kabuki, Bunraku and Kurosawa Akira have been the major influences on my theater and film life. Contemporary theater directors like Terayama Shuji and Suzuki Tadashi were also important to me.”

TIFF Programming Director Ichiyama Shozo served as moderator, nimbly guiding the discussion between theater, film and traditional arts. Because Yukisada had spent the past week steeped in Taymor’s work, he asked what the Japanese helmer thought about her latest film, The Glorias (2020), which focuses on the galvanizing American feminist Gloria Steinem, played by Alicia Vikander, Julianne Moore and two other actresses.

Yukisada enthused, “The combination of theater and film was unexpected. I anticipated the film would be a biopic about a female activist, but it was more like a journey. We may think that theater and film methodologies are different, but Julie does this really interesting thing of using a Greyhound bus to depict all four Glorias together, at different stages, in a metaphorical depiction of her internal journey. You get to travel with Gloria and witness her struggles and joys, and I really empathized with the protagonist. It’s an innovative idea that manifests itself in the theme of the film.”

Clearly pleased, Taymor explained, “It’s a film that takes place over 80 years of a woman’s life, and it comes from a book called ‘My Life on the Road,’ so it is a journey. I wondered how I was going to write the screenplay. I did something from Japanese art, I looked for an ideograph, this idea of taking the whole picture and reducing it to its essence. If I picked one image for The Glorias, what would the organizing principle be, the glue that holds it together, that we can keep coming back to? What form will it take that won’t be conventional?

“In The Lion King, for example, the circle is the ideograph. As an artist, a designer and a director, I have to find that. You see the circle of Mufasa’s crown, the circle of water, the circle of life. The theater is really good training for a filmmaker.”

Yukisada, also a veteran of stage productions, said, “I think the ideograph you used to portray the stages of this woman’s life is a relatively easy thing to do in theater, but not in film. You show us four generations of the same woman, with different sequences of the same woman at different ages. They all intersect and they’re able to have a dialogue together, and I found that really moving.”

Explained Taymor, “The book was a first-person narrative. The bus is forever traveling, never resting — it’s a bus out of time, the inner dialogue with your older and younger self. When I told Gloria Steinem about this idea, she said ‘How did you know?’ I said, ‘What do you mean?’ And she told me, ‘I often see my younger self across the street, and I always wonder, if she knew what I know now, would she still do the same thing?’ So I put that into a physical representation so that she could actually say those things to herself. And the bus is in black and white so no one gets confused.”

Yukisada noted, “When we try to adapt a film into a stage play and vice-versa, we have to think through the differences. In film, we’re often bound by chronological order, because if we direct a story that is non-chronological, the audience can be confused. Theater is easier, it gives us more freedom to do that. But your films cross these borders so lightly, and they really bridge entertainment and art.”

Taymor, of course, has been crossing a variety of borders from the beginning of her career. “When you go to the theater,” she said, “you know you’re not actually there in Africa when the character appears out of the grass. You suspend your disbelief. In my first feature, Titus Andronicus, which is also Mr. Yukisada’s favorite film of mine, I was adapting Shakespeare. In the original Shakespeare Globe Theatre there was no set, there were just actors, music and language. And yet there were castles, battles, fires, smoke — it’s poetry through language. I adapted that [bare stage] to the film version. Rather than showing the violent scenes, I showed the aftermath.”

She described how she’d directed the scene on stage, with the actress in white Roman garb, “similar to Marilyn Monroe in The Seven Year Itch, when her dress blows up above the subway grate, which is a form of rape. In the theater, it took place on an empty stage. In film, how could I represent the mutilation and rape? I chose a burnt-out forest fire in a swamp. And the boys had put her up on a grotesque tree trunk so she couldn’t run away, and they’d thrust twigs into her stumps, a physical manifestation of rape.”

She then returned to Yukisada’s remark about films being easier to understand if they’re in chronological order: “I don’t agree with you, because Go was not chronological. And it was so creative. I just think other filmmakers are lazy. We should tell stories on multiple levels: realistic, interior landscape, the dream, total abstraction. Why not use the artform in a more creative way? It’s so boring, all these closeups and handheld shots.”

Yukisada said, “We often say that we’ll leave the interpretation to the audience, but if the audience says it’s hard to follow, then we’re forced to find a middle ground between art and entertainment. I think you’re courageous to continue making art the way you do, to not compromise.”

“I don’t believe in playing down to the audience,” Taymor emphasized. “I think they can go much further than producers think. If the acting, story and cinematography is good, then the audience loves it. Both my 12-year-old and 6-year-old can follow The Glorias. You don’t need to dumb down your work.”

She recalled that the head of Disney had expressed concern when first seeing The Lion King, since there were masks and there was what’s underneath, and he worried that audiences might not get it. Of course, the musical went on to become the most successful production of all time, playing continuously for 25 years in over 100 cities in 20 countries.

“I worked with the animators who call themselves the Brothers Quay on Frida. They believe that going to the theater or a movie is like going up the elevator to the 16th floor. The top floor is sophisticated poetry, but the clowns are on floor 3, and the audience can get off wherever they want. If something’s rich and good, not everyone has to get everything. You can do philosophical and complex and still have a good story. That’s what I try to do.”

Going back to the impact that Japan has had on her, Taymor said, “Sometimes it’s true that the outsider is impressed by what the insider takes for granted. It’s great if you can look at your own traditions and find them fresh. Japanese traditional artforms are inspiring to all of us from the outside. Japan has the most sophisticated art theater in history.”

“So why are contemporary films so regular? Let’s find other ways to tell stories.”