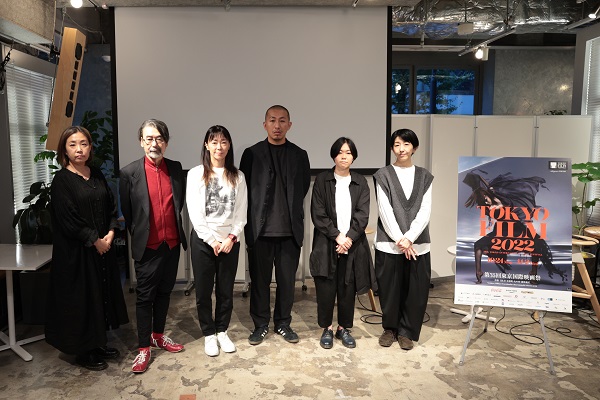 TIFF: Teens Meet Cinema commemorated its sixth year at the 35th Tokyo International Film Festival (TIFF). The workshop for teenagers, with established filmmakers as mentors, was initiated in 2017 as a welcome addition to the then newly-born TIFF Youth section, which aimed to foster young film audiences. Organized by Children Meet Cinema with the support of the Tokyo Metropolitan Government Project, the sixth workshop was held in July, with Hayakawa Chie, director of 2022 Cannes Special Mention honoree Plan 75, as the lead mentor for the group of junior and high school student filmmakers.

On October 30, after the world premiere screening of the teenagers’ directorial debuts, the TIFF: Teens Meet Cinema Special Talk Show was held at the Yurakucho micro Food & Idea Market. Marking the accomplishments of the past five years, the session brought together previous lead mentors – Suwa Nobuhiro (The Phone of the Wind), Ohku Akiko (Tremble All You Want), Miyake Sho (Small, Slow But Steady) and Seta Natsuki (A Liar and a Broken Girl) – as well as Hayakawa and Dohi Etsuko, a representative of Children Meet Cinema.

As a means to explain the difference between workshops aimed at younger children and students in their teens, Suwa shared an amusing anecdote about one participant who wanted to play the role of a police officer. To audition him, Suwa staged a mock press conference and filmed the student acting as a cop. Afterwards, the director asked if the performance was convincing and not one person found it believable.

“In the end, there are no junior-high age police officers,” noted Suwa. “I realized that understanding and believing are two different things. We understand that he is a police officer, but we don’t believe it. We can only believe that it’s a child acting out the part. And that’s only allowed in films made by kids. So I asked them if they want to make kids’ films or films for a broader audience.”

Ohku, who served as the lead mentor at the 31st TIFF, took a different approach. “Our theme was ‘Explore Your Imagination,’” she said. “I asked participants to make a presentation about what they find exciting so that they can pursue their interests.” Their very first homework was “observing a neighbor and making up a background story without actually talking to that person.”

According to one of Ohku’s team supervisors, the method of exploring participants’ creativity worked really well: “Our team had a lot of ideas. We pasted post-its on the wall whenever someone came up with new ideas. Eventually the entire wall was filled with post-its, as if the room itself was everybody’s brain.”

On behalf of Sugita Kyoshi, who was lead mentor in 2019, Kobayashi Kazuki, one of the team leaders, talked about Sugita’s method: “[We imagined] what the person sitting next to you would like or say.” As a result, the completed films became believable and realistic. Tokui Sen, one of the teen participants, said, “[One of the team members] looked like a person who oversleeps” and they developed a story from there.

The 2020 edition was apparently a challenge as the workshop was held online due to the global pandemic. According to Miyake, who served as lead mentor at the 33rd TIFF, “I wasn’t expecting to make any good films. Honestly, I wasn’t up for it. How is it possible to make films online?”

However, the students’ creativity made the online workshop worthwhile. “Despite our distance, one film created a big lie that the characters were living in the same apartment. That was brilliant and unexpected,” noted Miyake.

Similar difficulties were faced in 2021, when the originally scheduled face-to-face workshop moved entirely online in the end. Seta, lead mentor at the 34th TIFF, came up with a rather difficult theme for the online workshop: “Let’s Capture Something Invisible.” Team Yellow, however, took advantage of the virtual environment and created a meta-film that captures the awkwardness of online conversations. “It reminded me of that bizarre silent atmosphere,” said Seta.

Recalling her experience as a lead mentor this past summer, Hayakawa concluded, “I don’t see these films as beginner’s work made by children. As a fellow filmmaker, I was surprised how creative they are. Each one of the teens is talented and I hope they continue making films.”