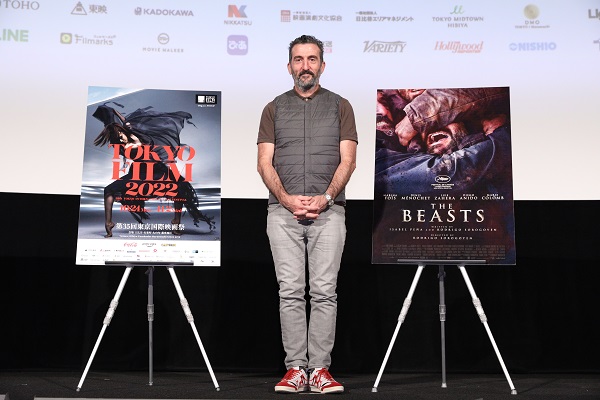 Spanish actor Luis Zahera, who plays a frightening antagonist in Rodrigo Sorogoyen’s The Beasts, made his first trip to Japan to support the Asian premiere of the film, and appeared at a Q&A session following a screening on October 30. The psychological thriller is playing in the Competition section of the 35th Tokyo International Film Festival.

Sorogoyen has made unsettling features before, including The Realm (2018) and Mother (2019), but his new film ratchets up the terror. The Beasts follows a French couple who immigrate to Galicia, Spain, for a quiet life in a rural village. After they’ve settled into a peaceful routine restoring an old house and starting a garden, Antoine (Denis Ménochet) and Olga (Marina Foïs) become aware that the other local residents aren’t exactly excited about having outsiders.

The two brothers who live on a neighboring farm, Xan (Zahera) and the younger, slower-witted Lorenzo (Deigo Anido), become especially resentful of the couple’s presence when Antoine and Olga object to the potentially lucrative construction of a wind farm for environmental reasons. Eventually, the tension that builds between the two households leads to a brutal and blood-curdling conclusion.

This is Zahera’s third film with Sorogoyen, an Oscar nominee for his 2018 short film Madre and a Cannes nominee with The Beasts. The actor gave a satisfied chuckle when he heard that the film had terrified the audience. Asked about his experience during the production of film compared to the previous times he worked with the director, Zahera told the audience that it was a bit like getting a drink with a new friend.

Zahera praised his meticulous directing style, saying, “Mr. Sorogoyan is a person who will do many rehearsals. He has everything planned out in this perfect environment, so everything is prepared before the shoot.” He recalled that the intense finale was shot in just two takes, citing the close-knit team of specialists Sorogoyen works with on each of his projects.

Zahera also had advice for those who aspire to go into acting one day, emphasizing the importance of actors and directors finding harmony, and of working “with a great director like Rodrigo Sorogoyen.”

Turning the conversation to the film’s title, an audience member asked Zahera if the ‘beasts’ in question referred to the brothers in the film, or if they represented something else. Zahera explained that there was more than one way to interpret the title, as the word ‘beast’ can mean different things in Spain. “In Spain, there are four languages: Castilian Spanish and the languages of Catalonia, Basque and Galicia. ‘Beast’ in Castilian means ‘brutal person’ or ‘violent person.’ But in Galicia it means ‘livestock,’ like horses or cows, so the title has a double meaning.”