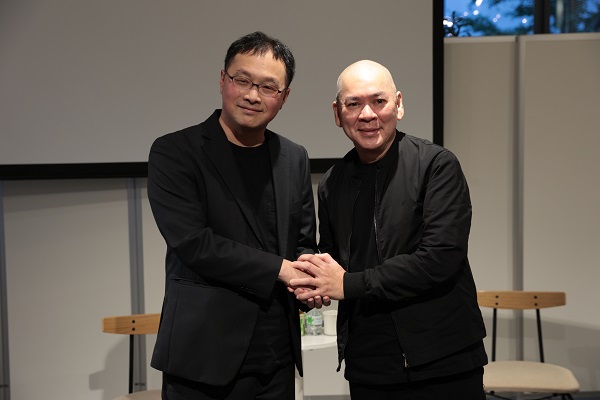 Acclaimed Asian filmmakers Tsai Ming-liang and Fukada Koji dropped by the TIFF Lounge (formerly the Asia Lounge) on October 29 to discuss their pursuits of creative freedom in today’s increasingly commercially oriented film industry. Co-presented by The Japan Foundation for the third year, the series of lounge talks is bringing filmmakers together to share their visions during the 35th Tokyo International Film Festival (TIFF).

Both Tsai and Fukada are no strangers to TIFF. Tsai, a leading figure of the Taiwanese New Wave, has been a guest of the festival in the past, including an appearance at the Asia Lounge in 2020. He is the Director in Focus at the 35th TIFF, which is celebrating his 30th anniversary in the business with four programs in the World Focus section that showcase several masterworks and short films.

Fukada’s career has been nurtured by TIFF for more than a decade. Both Au Revoir l’Ete (2013) and Sayonara (2015) were selected for the Competition section, and the Japanese auteur was the Director in Focus at the 33rd TIFF. Several hours after the lounge session, Fukada also became a recipient of TIFF’s Kurosawa Akira Award, sharing the honor with Alejandro González Iñárritu.

Fukada, also seeing similarities between Tsai’s and his own films, responded, “What’s wonderful about Tsai Ming-liang’s work is that he doesn’t deploy dialogue just to progress the story. My favorite filmmaker, Eric Rohmer, wrote that dialogue can be divided into essential dialogue, or exposition, and natural dialogue. Exposition is what characters have to say for the narrative to progress. With Mr. Tsai, of course there’s a story, but images and dialogue are not only used to progress it. I’m always trying to reduce the amount of exposition in my films, so I’m impressed with how much Mr. Tsai’s recent work is completely devoid of exposition.”

Tsai seemed to be especially impressed by Fukada’s Harmonium (2016), winner of the Cannes Un Certain Regard Jury Prize. “It’s a dramatic film, but everything was so realistic,” he enthused. “The film had a tremendous impact on me and made me believe that these people actually exist. The way filmmakers work with actors is different. But I bet you must have communicated a lot with Ms. Tsutsui, as she had to play a complex wife going through different stages of an emotional struggle.”

Fukada explained, “There’s not much rehearsal in Japan and it’s often the case that there’s very little time to talk with actors about the film. I don’t think that should be the case. I always try to make time to have a conversation with actors. So I did talk a lot about the character with Ms. Tsutsui.”

Despite being successful filmmakers in their own rights, both Tsai and Fukada struggle with box-office revenue. Fukada noted, “My films are neither relatable nor entertaining. They’re not something that suddenly makes a splash and becomes commercially successful. To put it bluntly, they don’t become box-office hits.”

“I’m a failure in terms of box-office returns,” laughed Tsai. “I’ve never experienced a big hit. That being said, I’m very satisfied. I like each one of the films I created. I believe my films will endure.”

Said Fukada, “Young filmmakers in Japan are also struggling financially. But your films always give me courage. It makes me realize that it’s okay to make films in a certain way.”

Yet the Taiwanese film industry continues to pose challenges to arthouse filmmakers like Tsai. “Recent Taiwanese films aim for commercial success and there are more genre films,” he noted. “It might look good market-wise but it’s not as wonderful as it used to be. I find it very sad.”

“I actually sell the tickets myself for my films. One month before the release, the actors and I go out in the street and sell 10,000 tickets. Since we sell that many tickets, we can ask theaters to run the film for two weeks since the audience will be coming. Otherwise, my films would be screened only for a day. I’ve been doing this for the past 10 years.”

Despite the difficulties facing artists, Tsai seems to be happy with the way he works these days: “It’s about whether you make films you want to make or what the general public wants. For me, filmmaking only means pursuing my own creativity, which has little to do with the film industry.”