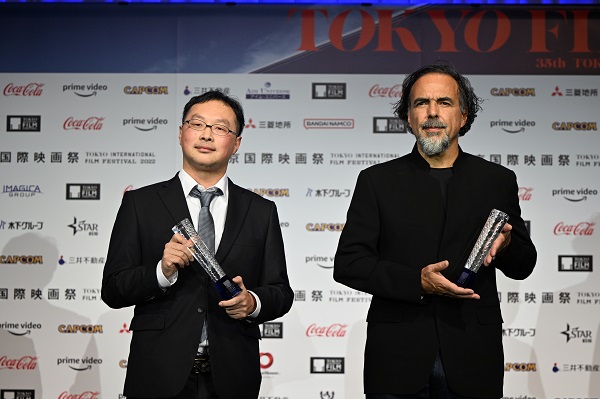 At a sumptuous black-tie event on October 29, leading lights of the Japanese film industry and notable international guests gathered at the Imperial Hotel for the Kurosawa Akira Awards Ceremony. Reinstated for the first time in 14 years as part of the 35th Tokyo International Film Festival, the awards honor the renowned auteur’s legacy and ongoing influence, and are presented to filmmakers who are making extraordinary contributions to world cinema and are expected to help define the film industry’s future.

TIFF Chairman Ando Hiroyasu welcomed guests with brief remarks in both Japanese and English, noting that, “A member of the Kurosawa family told me that ‘justice and humanity’ were the common themes underlying all of Mr. Kurosawa’s films. When I look at what is happening in Japan and the world, ‘justice and humanity’ is exactly what we need most. Therefore, the rebirth of the Kurosawa Akira Award is really quite timely.”

He extended warm congratulations to the honorees, as well as a special thanks to Iñárritu, who had arrived from New York the night before and had met the press today, before the screening of his new film Bardo, False Chronicle of a Handful of Truths in TIFF’s Gala Selection.

The crystal trophies were presented to each of the men by CAPCOM Chairman and CEO Tsujimoto Kenzo, representing the underwriters of the awards.

Iñárritu spoke first. “It’s a real honor for me to be in Tokyo receiving this beautiful and very meaningful award,” he said. “It’s also a privilege to receive it with Koji Fukada. My relationship with Tokyo started 22 years ago, when I came to TIFF with Amores Perros. I won two awards and received $100,000 in award money, which changed everything for me. I fell in love. Seven years later, I came to shoot a section of the film Babel and lived here for 5 months. It was one of the most incredible experiences I’ve ever had as a filmmaker, and one of the happiest experiences of my life. Then I was invited to be president of the jury in 2009 and that was also great.”

“I then came with my daughter and walked between Buddhist retreats in northern Japan. We also had a week in Nara and studied with a great ceramic artist. Now I’m here with my son sharing the city. My relationship with Japanese culture has been very deep, from music to literature to film. To receive this award in the name of the master of masters, the god of the temple of cinema, who has had a profound influence on every other filmmaker, is such an honor.

“Three specific Kurosawa films have been most important to me: Rashomon, Ran and Seven Samurai. I want to thank TIFF for this meaningful, honorable award and for giving me this opportunity to be here, sharing this with my son.”

As expected, Fukada, a well-known activist on behalf of independent filmmakers in Japan, took the opportunity of the awards ceremony to speak about conditions in the industry. “I’m extremely pleased to be sharing this award with such an accomplished filmmaker as Mr. Iñárritu, whose achievements I may never reach,” began Fukada. “I believe I’m being given this award to encourage me as a filmmaker.

“When I was a teenager, I watched many films and developed a love for cinema. I watched Stray Dogs for free on 16mm at a public screening in Koganei, Tokyo, and I just soaked myself in classic films through my junior high and high school years. I grew up watching films by masters like Kurosawa, Ozu, Mizoguchi and Naruse, then I entered film school. There was a golden era of cinema in Japan, and during that time, the directors and crew were hired by the studios and their livelihood was guaranteed.”

“When I started working in 2000, the studio system had collapsed, and industry stability had been lost. Everyone was working as a freelancer. After 2000, budgets started going down and we all had to live in a time of great instability. Then in 2020, the pandemic hit us all, including members of the film industry. The cinemas, too, were faced with the decision of closing down, due to the situation. Many actors have been lost to suicide, many are out of work and we need to think about ways to protect those working in the industry.”

“There’s also the pressing issue of harassment, mental health and other serious situations in the film industry that we now recognize thanks to whistleblowers. We could not wait for a legal safety net, so we began our own organization called Arts Workers Japan, which is funded by donations and in danger of closing down. Since I received the award primarily for my activism, I would like to donate my award money for this vital service to continue.”

“And in closing, my favorite film by Mr. Kurosawa is Dodes’ka-den.”