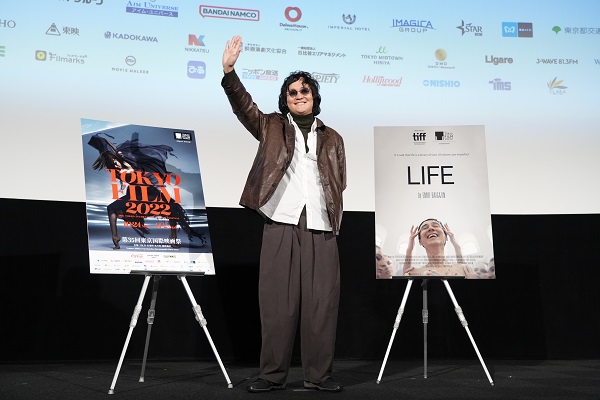 Kazakh director Emir Baigazin’s fifth feature, Life, had its Asian premiere in the Competition section of the 35th Tokyo International Film Festival, and the director was on hand for a Q&A session following the screening on October 29. The audience had clearly enjoyed the film, but, at 170 minutes, there was a lot to be discussed.

TIFF Programming Director Ichiyama Shozo began by commenting that Life was much different from previous Baigazin films in that it mostly took place in a “modern city,” in this case Almaty, whereas the auteur’s earlier films all took place in rural settings.

“A lot of people think this is different from my previous films,” the director explained. “But it isn’t. Whether the story takes place in a big city or in a village is irrelevant in terms of the task God has given me. I first started thinking of this movie when I was working on my first feature, and though all five of my films have different patterns, if you interpret them chronologically, you can understand my meaning.”

In a sense, Baigazin’s explanation mirrored the abstract nature of his film. The first hour has a conventional plot: A young tech worker, Arman (Yerkebulan Tassynov), who is expecting his first child with his girlfriend, gets hired by an IT startup that specializes in personal video productions. The CEO is impressed with his skills to the point that he asks him to reconfigure the company’s hard drives, but in the process, Arman loses all the data, including the video files provided by its clients, one of whom is a local business leader putting together a tribute to his war hero father.

When he learns that Arman is responsible for the loss of his precious video resources, he tortures and then buries him alive, only to disinter him in order to force him to head a project for a local charity he funds. Arman later embarks on a journey of self-enlightenment that covers several stages—religion, art, new-age fulfillment, medical pragmatism, abject nihilism.

One viewer wondered if the movie reflected Baigazin’s “cynical” attitude. “That’s absolutely correct,” the director replied. “Words are only the tip of the iceberg. I’m sitting here now on stage with many conflicting ideas in my head. Life isn’t just about being truthful or beautiful.”

Another audience member commented on the many scenes involving dancing—at one point Arman works as a wedding dancer, and at another he joins a ceremony to achieve peace of mind—and wondered if it was emblematic of something larger.

“Dance is something that connects the events in an individual’s life,” Baigazin explained. “The protagonist encounters various challenges along the way, and in order to address these challenges he resorts to dancing.”

Inevitably, one questioner got to the core of the issue and asked if what he had seen was “real or a dream.” Baigazin replied with two answers: “The Life Hotel, where Arman dwells for a while [and endeavors to donate part of his liver], is a real place. The other matter is whether he is alive or dead at the end of the film, and I will leave that up to you. What happens to him is totally your decision.”