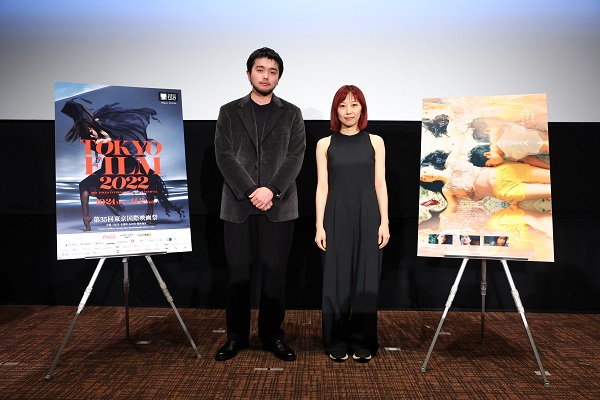 There are enigmas hiding inside mysteries in Ito Chihiro’s otherworldly In Her Room, which had its world premiere on October 28 in the Nippon Cinema Now section of the 35th Tokyo International Film Festival (TIFF). The writer-director was on hand for a rousing Q&A session after the screening, accompanied by her protagonist, Dr. Susume, who is played by Iguchi Satoru, the keyboardist for J-pop band King Gnu.

Asked how he’d enjoyed the experience of watching the film together with the audience, the popular musician said, “I only watched until about halfway through, but I could feel that the audience was getting really tired. I was thinking of warning you at the stage greeting that you would get lost unless you use your head. From the trailer, you might have expected a love story, but of course, you discovered it isn’t.”

Ito is making her directorial debut with the highly anticipated film, which she adapted from her own novel. An experienced screenwriter and longtime Yukisada Isao collaborator (Crying Out Love, in the Center of the World, Spring Snow), she establishes herself instantly with a story, visual and aural style that is so unusual it sometimes borders on the absurdist. But the film remains captivating throughout.

Dr. Susume is a dentist who finds communication painful (although he freely carries on long conversations with himself and various inanimate objects). One night, he meets Miyako (Baba Fumika), who invites him into her apartment-cum-arboretum, where they begin to tell strange little stories to each other and languish amongst the vines. Soon after, he trips and falls on the street, and a car runs over his leg without stopping. When he next visits Miyako’s secret garden, hobbling on crutches, there is someone else languishing among the vines: Yoko (Kawai Yuumi) who will become more than a rival for Miyako’s affections. Maybe.

Things get weirder. He starts getting constant, silent phone calls from the elusive Miyako. A man apparently commits suicide in her apartment. Praying mantises (heavily metaphorical) crawl up and down the walls. Vials of liquid are kept in the fridge. One late night, Dr. Susume is chased by a ball of light that emits groaning sounds. Treating a patient, the doctor starts groaning himself.

Calling it “such a mysterious experience, I couldn’t look away,” one audience member asked how Iguchi had prepared for the role, which is so limited in dialogue that many scenes could almost be pantomimes.

“The novel is written in diary style, so Susume’s feelings are clearly written,” the actor responded. In the film, I had to communicate his emotions through gestures and facial expressions. Since we shot the film in a nonchronological way, it was really a challenge. I had to make it really clear what he was feeling in each scene, so that his emotional evolution builds convincingly to the end.”

The director concurred. “We talked a lot about Susume’s personality before we started shooting,” she said. “Since the film is all about his evolving emotions, and we sadly couldn’t shoot it chronologically, Mr. Iguchi had to focus intensely throughout the shoot.”

Ito was asked why she’d chosen the musician, who’s had limited acting experience, for such a demanding role. “When I completed the novel,” she recalled, “I got an offer to make it into a film [from Yukisada himself, who takes a “planned and produced by” credit]. Even before I wrote the script, I had Mr. Iguchi in mind. If he hadn’t been able to do it, I wouldn’t have made the film.”

“I’d seen him in Mr. Yukisada’s film Theatre: A Love Story, and I liked his acting very much. I wondered what he was like as a person, and we had the chance to meet and talk one night. It’s not that he resembles Susume, but he has an expressiveness and a subtlety of expression that was perfect for the role.”

“I often talk to myself,” Iguchi admitted. “Just tonight I was humming to myself without realizing it, until someone told me I was doing it.”

Iguchi was asked which scene he’d found the most memorable, and he barely hesitated before replying. “I think the most memorable scene is one of the very last, when Susume goes home to have dinner with his mother [and her female partner]. For those who haven’t read the original novel, it’s a bit different from that. In the novel, that scene is rather negative, since Susume announces he’s planning to move to Nagasaki. I decided to make it a bit warmer, more hopeful. I don’t know if I succeeded, but that was what I was after.”

“I loved that scene as well,” agreed Ito. “Thanks to my conversations with Mr. Iguchi, I think something was born inside him and he went beyond my own interpretation of the character. If it weren’t for him, that scene wouldn’t have been like that. We had a discussion about whether or not this was a happy ending, and he was able to give it a lot of warmth and hopefulness.”

Hands continued to shoot up as time ran out on the Q&A session, so the final question was about Iguchi’s future as a thespian. His response bodes well for an expanded fanbase: “I’d done a bit of acting before, but after doing this, I really felt I’d become an actor. What I learned from playing this role, I’m now utilizing in my singing. And I’m also utilizing my experience as a musician when I act.”