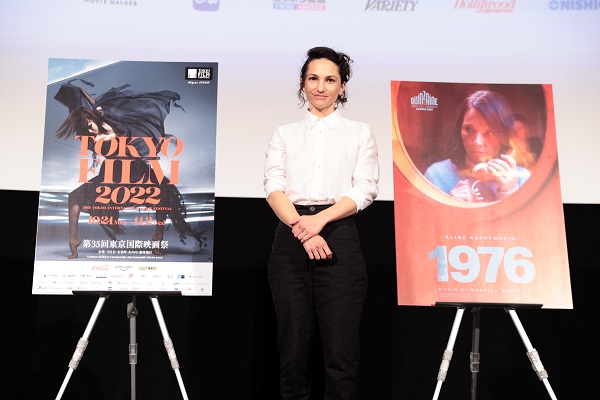 The Chilean film 1976 had its Asian premiere in the Competition section of the 35th Tokyo International Film Festival on October 28, and during a post-screening Q&A session with actress-turned-director Manuela Martelli, she was asked about her use of color.

The opening scene, in fact, shows the protagonist, an upper middle-class grandmother named Carmen (Aline Kuppenheim), in a hardware store getting paint pigments custom-blended, when a woman’s scream from the street outside shatters the transaction. Carmen is getting the paint for her beach house, and at first she chooses a pinkish shade.

“I wondered what color a bourgeois woman like her would choose,” Martelli told the audience. “I imagined her in the beginning living in this pink world, and then gradually, I wanted the pink to become more bloody. When the woman screams in the beginning, the paint is pink. But in the end, when Carmen is painting the house, she has since been touched by the dictatorship, which is now in her house.”

The dictatorship to which Martelli refers is that of Augusto Pinochet, who in 1976 was in his third year as the leader of the military junta of Chile, after seizing power in a 1973 coup d’état. This opening scene sets the stakes. Pinochet had been using non-judicial detentions, torture and murder against his political foes, but none of that touched the lives of people like Carmen, who is married to a successful doctor and is a respected member of her privileged community.

She doesn’t even seem to know about the political situation, and when a local priest asks her to help a young man who’s been wounded by the police, she is easily led to believe he is merely an impoverished petty criminal who was stealing some food. In accordance with her sense of noblesse oblige, she secures some antibiotics and treats his injuries (she once trained as a nurse), but the man requires time to heal. Carmen eventually learns the truth, that he is an activist wanted by the police, and that by helping him, she is putting herself at great risk.

“The idea for the film started when I thought about my grandmother, whom I never met,” said the director. “She died in 1976, and was severely depressed in the latter years of her life. My family thought the depression was part of who she was, but they didn’t properly consider the context of that era, the worst years of the dictatorship. So I wrote a story, a kind of revisionist history from an intimate perspective, and asked myself how the dictatorship could have infiltrated the walls of a house. I wanted to look at history from a woman’s point of view, which is something that is rare in Chilean history and cinema.”

In that regard, Carmen is both a vivid presence and a riddle. As a woman of her class and status, she is constantly complimented for her beauty and taste, but as her convictions change through her contact with the leftist underground, which gives her the code name Cleopatra, she becomes not only enlightened, but deeply conflicted. She recognizes how much her social position is a tacit confirmation of the brutal regime, and once bodies start floating ashore near her beach house, she understands that she will never be able to escape her own responsibility.

“That was based on a real situation,” said Martinelli. “In 1976 a woman’s body was found on the beach. She was the first disappeared person to turn up, wrapped up with an iron weight and thrown into the ocean out of a helicopter. She was an activist and the press invented stories about her, that she was killed by her partner or was a foreigner. It was all to hide the truth. This was a period of silence and suspicion. You were always performing, because you didn’t have the freedom to be yourself.”

One audience member wanted to know how the film has been received in Martelli’s home country. “It’s been well received in Chile by those who’ve seen it,” answered the director. “It was wonderful to see people react to the details, because it has very Chilean details. It touches many people because of the context we’re discussing here. Also, we just went through an important social revolution and wrote a new constitution, which unfortunately wasn’t approved, and that’s really frustrating for many people. I think this movie touches those people a lot.”