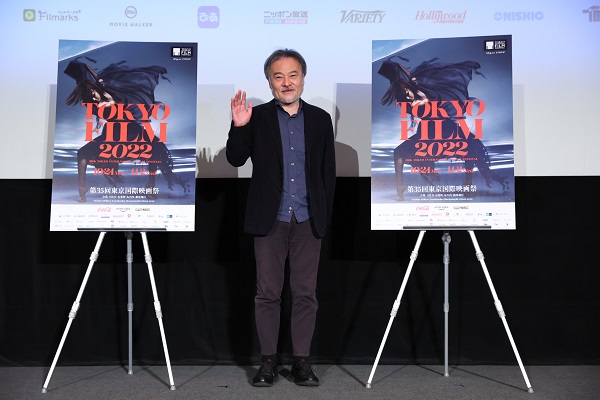 When Kurosawa’s low-budget thriller was first released in 1992, the genre of Japanese horror did not yet really exist. But the film’s eerie atmosphere, slow-building dread and staging of violence in everyday locations would all become staples of the movement known as “J-horror,” less a genre than an approach to horror filmmaking that Kurosawa himself best represented and perfected, and which would soon make international film waves.

In the film, Narushima Akiko (Kuno Makiko) is set to begin her job as a consultant for art purchases for a rapidly growing corporation. One of the hulking security guards for the company, Fujimaru (a menacing Matsushige Yutaka), is a former sumo wrestler who is being reinvestigated for the murder of his former lover. While Akiko tries to navigate the office politics of her small department, Fujimaru becomes obsessed with her, hanging a picture of her in his basement dwelling and wearing an earring that she dropped. Fujimaru soon begins a murderous rampage of everyone in Akiko’s department.

The premise of The Guard from Underground was in fact based on American slasher films of the 1970s and 80s, a genre which was totally non-existent in Japan at the time.

“I thought we could do it on a low budget, but our passion carried it through,” said Kurosawa.

The film was the last title produced by Hasegawa Kazuhiko’s Director’s Company, a production studio that had been founded in 1982 by nine up-and-coming directors, including Somai Shinji, Ishii Sogo and Negishi Kichitaro. The Director’s Company is being feted in a TIFF sidebar co-hosted by the National Film Archive of Japan.

Kurosawa was the only one who hadn’t yet directed a feature of his own, but was ordered to join after serving as assistant director to Hasegawa on The Man Who Stole the Sun. The young assistant director took on multiple roles during the film’s production, including briefly appearing on screen as a wanted criminal.

The Man Who Stole the Sun has become particularly infamous for the liberties its staff took with chaotic location shooting in Tokyo. Kurosawa recounted that he had actually been arrested for shooting a scene in which one of the characters scatters counterfeit currency, a crime in Japan.

“When the police asked me who was responsible, I said it was me,” said Kurosawa. “Even after some of the veteran crew came to pick me up, I continued to claim it was my idea.”

The veterans who bailed Kurosawa out of jail were no longer part of the Director’s Company, as they had all moved on to their own projects by the time production started on The Guard from Underground. Kurosawa likened the process to an amateur indie flick. The crew was filled with a new generation of young talent, such as director Sasaki Hirohisa, cinematographer Negishi Kenichi, and a young Aoyama Shinji, who was an AD on the film (and after passing away suddenly this year, is receiving his own sidebar at TIFF).

The film also used cost-saving props like miniatures to shoot the exterior of the corporation’s building, but such an approach was in keeping with the ethos of the film.

“We were aiming for that kind of American B-movie horror,” explained Kurosawa.

Looking back on The Guard from Underground now, Kurosawa says the film’s setting is of its time: “It does have a ‘bubble-era’ atmosphere, where the staff is handing out huge sums of money to buy paintings, but the office itself is destitute.”

Of course, the “bubbly” times did not last, and Kurosawa admitted that not everyone was paid properly for their work on the film, as the Director’s Company went under shortly after the film’s release. The film was screened sporadically around Tokyo over the years before being heavily endorsed by Ichiyama in recent years.

“I’m happy to see the film digitally remastered, even if it’s a little embarrassing to watch it now,” said Kurosawa. “What’s most important is that film endures, no matter the form.”