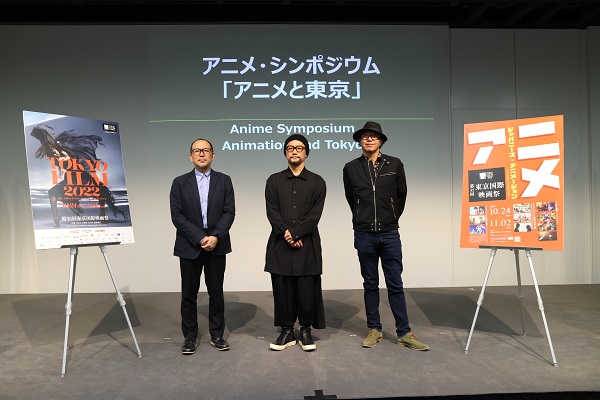 Anime fans will not be surprised to hear that representations of Tokyo in the medium are as diverse as the city itself, and reflect its evolving iconography. This and other conclusions were reached on October 25 at the Animation and Tokyo symposium held during the 35th Tokyo International Film Festival.

Where cyborg and robot superheroes programs such as 8-Man and Tetsujin-28 (Gigantor in the west) in the 1960s featured icons of progress, such as Tokyo Tower and the Tokyo Metro, apocalyptic sci-fi action such as Harmageddon and Megazone 23 in the 1980s are set amidst tall skyscrapers such as those found in West Shinjuku.

Both Ito and Ueno’s impressions of anime-ted Tokyo is as a city that has been razed and rebuilt. Ueno cited Akira as a film that embodies Tokyo’s “scrap-and-build” mentality both through the city’s destruction in the film but also through its hooligan characters’ cavalier attitude toward the urban environment.

Ito, on the other hand, explained how Rintaro’s film adaptation of Clamp’s supernatural sci-fi manga X typified his post-bubble generation’s view of Tokyo.

“I remember thinking, ‘Tokyo is a nice city to destroy,’” said the director. “There are probably no other cities in Japan that have so many icons to demolish, which is attractive from an animator’s perspective.”

Ito directed the popular sci-fi adventure Sword Art Online TV series and his Sword Art Online the Movie: Ordinal Scale is playing at the 35th TIFF. The franchise revolves around characters stuck in a real-life augmented reality game and grew to popularity at the same time that smartphone location-based ARGs such as Ingress and Pokémon GO became smash hits.

“While making the film, we wondered if what we were making could actually happen, so we were lucky when Pokémon GO showed us in real time,” said Ito.

Ordinal Scale is set in various areas of Tokyo, including Akihabara and Yoyogi, and Ito aimed for a playful but recognizable representation of the city. Buildings in the film include futuristic versions of Akihabara’s UDX Building and the Japan National Stadium.

“We could have set some scene in Asagaya Station like a lot of anime companies, but we wanted to aim for a familiar, cinematic setting by choosing more well-known areas,” said the director.

Having lived in Tokyo for over 20 years, Ito’s impression of the city has changed. What he once viewed as a place full of scary hustlers now seems much safer, though perhaps also less interesting.

“Kabukicho is a lot cleaner and easier to access now, but I’m not sure if that’s a good or bad thing,” said the director.

Ueno noted that one of the unique facets of anime like Ordinal Scale is its ability to preserve images of Tokyo’s rapidly changing landscape while also showing how the city is gentrifying over time.

“When we think of violence in war, it is not just the physical act of violence, but also the destruction of history and memory, and a similar thing occurs in urban redevelopment projects,” said Ueno. “Anime frequently explores this loss of information that occurs when we erase the lives and memories of those displaced.”

One unique quality to anime is its ability to fictionalize ordinary spaces and, in turn, make them into meaningful places. As anime has grown in popularity, fans have made “pilgrimages” to such “holy sites,” or real-life locations that are prominently featured in specific anime works. Ito said this might be by design.

“One advantage anime possesses over live-action filmmaking is the ability to ‘shoot’ any place without having to get permission, something notoriously difficult to obtain in Tokyo,” said Ito. “I consciously try to make such locations as attractive as possible because I don’t want people to get angry when I use them.”

Ito discussed the environments of other works he has recently directed. Hello World is a sci-fi, CG-animated film set in a futuristic Kyoto, and the director said that the city’s grid-like structure was a better fit than Tokyo’s for the film’s 3DCG animators. He did complain, however, about the city’s lack of tall buildings.

“It’s not as satisfying to destroy,” said Ito, “so we ended up just destroying Kyoto Station and the Kyoto Tower in the film’s climax.”

Ito’s The Millionaire Detective Balance: Unlimited, which aired in the summer of 2020, was one of the first anime to reflect the COVID-19 pandemic. The director said he instructed animators to put masks on characters, though cautioned that the insertion of such contemporary details depends on the work.

“That doesn’t work for Dragon Ball, but if the work is set in a specific time period, then I think it’s good to reflect that,” said Ito.

Ito and Ueno singled out Oshii Mamoru’s Patlabor 2 the Movie, also playing at the 35th Tokyo International Film Festival, for its representation of the city. Both pointed to the film’s layouts, which Ito described as “incredibly believable” and which Ueno argued reflects Oshii’s “love-hate relationship” with Tokyo.

“He wants to destroy the city, but he also has an apathetic connection to it,” explained Ueno. “He’s asking us how we should live with this ambivalent relationship.”

This love-hate relationship might be less prevalent among contemporary creators. Ito said his view of Tokyo, for example, is “a place that he grew up watching in anime,” and he has no desire to destroy it or depict its destruction.

While Japan might be facing dark times ahead, both Ito and Ueno have hope for Tokyo evolvution.

“Tokyo has kept this scrap-and-build mentality for over 100 years,” said Ueno. “Isn’t it time we start thinking about constructing buildings, films and anime that will stand the test of time?”