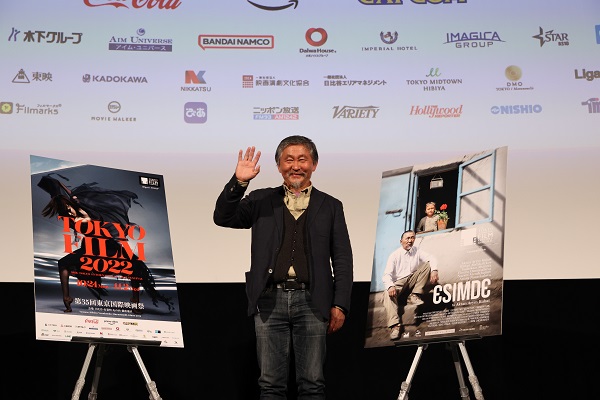 Kyrgyz director Aktan Arym Kubat has been a regular at the Tokyo International Film Festival since 1998, when TIFF showed his debut fiction feature, The Adopted Son. His latest work, This Is What I Remember, had its world premiere at the 35th edition of TIFF on October 27, and during the post-screening Q&A session, he revealed that the movie was a kind of “sequel” to The Adopted Son in that all his subsequent feature films have been about his own life.

“This new film was a way for me to summarize all the others I made,” he told the audience. “It contains the same locations and the same actors as in my other films. In fact, the actor who plays the son of the protagonist in the film is the same actor who played the title character in The Adopted Son, and who is actually my son.”

As he has done in several previous films, Kubat himself plays the main character. Zarlyk has been missing and presumed dead for 23 years after going to Russia to work. His son, Kubat (Mirlan Abdykalykov), eventually discovers him on a website of unknown persons and is able to bring him home. But Zarlyk, who was injured in an accident many years before, has no memory of his family and does not speak. He spends his days in his hometown wandering about, obsessively collecting garbage, while his old friends and his son’s family fret about his mental condition. Zarlyk’s return upsets his former wife, Umsunai (Taalaikan Abazova), who, believing he is dead, has married again. Her new husband is the town’s much-despised loan shark, a man of means who drives a Lexus and lives in a housing compound.

When asked by TIFF Programming Director Ichiyama Shozo where he got the idea for the story, Kubat said he found the broad outlines on the internet about 20 years ago and had always wanted to make a movie about it. But the plot of This Is What I Remember is totally a product of his imagination. What intrigued him about the premise was the workings of memory, and how “we all want to retrieve our memories of the past, or that is our hope.” The movie remains ambiguous, however, about Zarlyk’s ability to recollect his beginnings or whether he has embarked on a new life that has as much meaning as his old one.

Another aspect that is central to the story is the role of Islam in the town. There seems to be a split between those whose devotion is absolute and those who have a looser relationship with their God. This conflict mainly manifests itself in the situation of Umsunai, who, since remarrying into a devout Muslim household (despite her husband’s unsavory business dealings), has had her freedoms suppressed. The return of Zarlyk causes her question her decision to remarry.

“For me, the current form of Islam, based on my experience, is more aggressive,” said Kubat when asked about this conflict. “It is not easy to tolerate in terms of our traditions, which are different. I am not against Islam. But I am against the Arab form of the religion that is widespread in my country, and I have tried to convey this idea through the character of Umsunai, who wants to regain her identity.” The director went on to say that Muslims in Kyrgyz use Arabic to pray, “but I prefer to speak in my own language when I talk to God.”

One audience member asked about Kubat’s aesthetic choices, especially in terms of his cinematography. “As you may have noticed, the camera is always moving,” said the director. “We shot everything with handheld cameras.” His methodology proves especially effective in a scene where the townspeople frantically attempt to put out a fire. As the camera’s gaze shifts from one panicked figure to another, it renders the emotional chaos immediate and powerful, although the viewer is always aware of exactly what is going on.

Q&A Session: Competition
This Is What I Remember
Guests: Aktan Arym Kubat (Director/Screenplay)