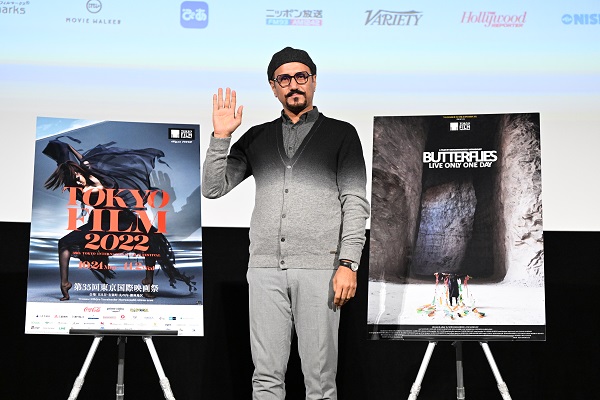 Veteran Iranian director Mohammadreza Vatandoust’s impressionistic feature Butterflies Live Only One Day had its world premiere in the Asian Future section of the 35th Tokyo International Film Festival. Following a second screening on October 28, the director appeared at a Q&A session and was met by an audience of enraptured filmgoers.

“This is a film based on a real story,” he told them. “We actually shot it on the island where the story takes place.” That island is depicted in the film as an object of obsession for an unnamed old woman, played by Manzar Lashgari, who is the last holdout in a region that has been totally inundated to make way for a huge dam. While every other family in the various villages in the area has opted not only to move but to take their family graves with them, the old woman has stubbornly held her ground because the grave of her son, killed in the Iraq-Iran War, remains on a hill that has become an island in the reservoir created by the dam project. She sits in her house on the rise overlooking the island and constantly pesters local bureaucrats for the opportunity to visit it to mourn her son, but they somehow find excuses to refuse her.

“We all have goals of some sort, just like her” said Vatandoust, “and we struggle to reach them. In the process, we face obstacles, whether it is a rule or the bureaucracy, and if we cannot reach our goal in reality, we escape into dreams. But even then, if we cannot attain what we seek, we look to nature. In the scene when she goes to pray with a candle, nature shows her what to do by sending her an empty PET bottle, which gives her the idea to make a boat. As to whether she succeeds in making it to the island in that boat, I leave it to your imagination.”

Vatandoust leaves little else to the imagination, since he finishes the movie with a detailed summary of the true story behind the movie. But up until that point he uses very specific imagery in an attempt to get at the feelings this woman suffers every day. As one audience member commented, some of these images are so striking as to be almost surreal. “I have traveled throughout Iran as a photographer,” said the director, “and I chose some locations that I thought were appropriate for the images I wanted.”

Structurally, the film has three types of scenes that are juxtaposed randomly: reality-based incidents, mostly involving literally faceless public officials refusing the old woman’s entreaties; her struggles to achieve her goal against nature and old-age infirmity; and dream sequences in which she embarks on absurd efforts to reach the island.

The audience was obviously impressed, and the questions addressed how Vatandoust accomplished these startling images. “I never use medium shots,” he said. “They are useless. For me, it’s either long shots or closeups—long shots because you can show the relationship between the character and their environment or other characters, and closeups in order to reveal the characters themselves.”

Another pressing topic was the old woman. Apparently, her name is not Googleable. “In most current Iranian films, there is lots of dialogue, since they focus on interrelationships, but I value silence,” explained the director. “If I need explanation, I use narration. The actress who plays the old woman is actually a stage performer who has done very few films. She is also a director in her own right and holds a doctorate. I asked her to go to the site of the real story, which is where I grew up, and asked her to don the garments of an old lady, and so she learned firsthand how women in that area might feel in that situation.”

He continued. “It’s important to choose your actors well. Once you have the right person with the right speech patterns and body language, you have achieved 70 percent of your mission.”