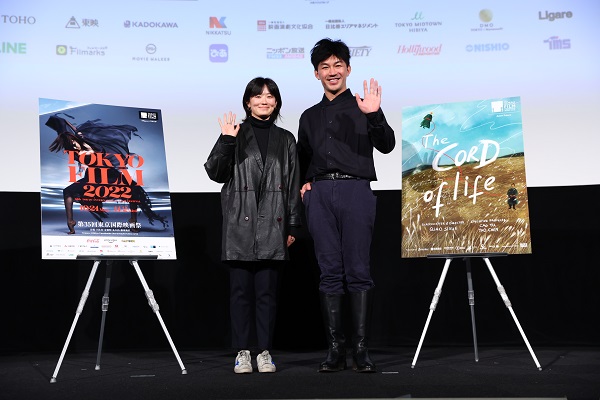 Chinese director Qiao Sixue’s debut feature, The Cord of Life, had its world premiere in the Asian Future section at the 35th Tokyo International Film Festival on October 25. Two days later, its the director was on hand for a Q&A session following a second screening.

The film’s premise is a fairly familiar one: A young man who has thrown off the trappings of his upbringing and found success in the big city returns to his hometown to care for a parent, and in the process, discovers that the culture which nurtured him will always be a part of who he is.

In The Cord of Life, a successful club musician, Alus (real-life electronic artist Yider) returns to Inner Mongolia to visit his mother when he learns that her cognitive disability has progressed to the point where it is destroying the household of his older brother. He decides to take his mother back to their house on the Inner Mongolian steppe in the hope that she’ll be happy there, but she insists that her “home” is somewhere else, and it’s up to Alus to find out where that is.

During the Q&A session writer-director Qiao remarked that she didn’t make the film for any particular market or audience. Having studied film in France, she had been exposed to a wide range of national cinemas and felt that it was a story that the world should see. “Mongolian is my mother tongue,” she told viewers, and said she wanted to make a film with a universal theme that also conveyed the circumstances of a place that many people probably didn’t know about.

The idea of melding modern China, as represented by the electronic endeavors of Alus, with the more traditional culture of Inner Mongolia, also conveyed by Alus since he studied traditional Mongolian instruments as a child and incorporates them into his compositions, is the lynchpin of the movie’s emotional component. Alus is frustrated by his mother’s inability to even recognize him as her son, and so he plays music for her throughout their journey to find the elusive “home,” and the primacy of his sounds penetrate her fog of confusion: Melody conquers all.

“[Yider] is from Mongolia, and he has made a living as a musician in Beijing,” explained Qiao. “He has really been able to combine genres, and, actually, many young musicians are doing the same thing, mixing traditional ethnic music with electronic club styles.”

What’s surprising about Alus’ rediscovery of his heritage is that he decides to embrace it completely, and in the film’s most indelible scene he musically joins in a grasslands festival that doesn’t feel anachronistic or odd. His artistic sensibility fits in perfectly, and, moreover, gives joy to his mother, who no longer needs to be attached to him by the metaphorical “cord of life.”

Asked whether the film was based on her own experiences, the director explained, “The idea came to me when I was in France. I did not have a good relationship with my mother, and I wondered if I should stay in France or return to China. Then I met a woman who was depressed to the point of considering suicide, and it prompted me to make a short film about my own relationship with my mother. I decided then that I wanted to make a feature film about my mother, and about Mongolia.”

One Mandarin-speaking woman in the audience, who said she also attended the October 25 screening, asked the director how it felt being a young female filmmaker in an industry that was predominantly male.

“I don’t think the job has anything to do with gender,” answered Qiao. “What’s important is communication—if the director is respected by the cast and crew, it’s because they have the ability to complete their vision.”