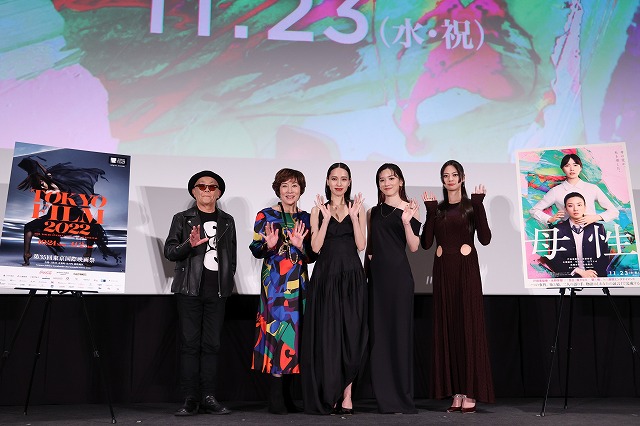 He appeared to introduce one of them, Motherhood, along with several of his female stars — Toda Erika, Nagano Mei, Takahata Atsuko and Yamashita Rio — prior to the film’s Japan premiere on October 27.

Toda cautioned viewers that, “Your reaction to the film seems to depend on what generation you’re in, but I hope you’ll enjoy it. I’m really curious how people are going to react.”

Takahata, the veteran of the group, said, “I play a woman that I’m familiar with from my childhood, whereas the other women all seem a bit strange to me. I think my character is actually the easiest to understand.” (Read on to see why this is a terrifying thought.)

An often candy-colored adaptation of the controversial novel “Bosei” by Minato Kanae (who also penned Confessions), Motherhood stars Toda and Nagano as a mother and daughter who do not see eye to eye about anything, least of all the latter’s death. Cleverly structured as an intricate She said/she said thriller, the intense drama of love and hate rakes just about every character through the coals, and audiences are left to decide which of the many divergent viewpoints is actually closest to the reality.

The central mother-daughter relationship may be toxic, but the film depicts more than just one such bond: Toda’s character, Rumiko, idolizes her own mother (played by Daichi Mao), who also seems to be the perfect grandmother to Nagano’s character, Sayaka. But Rumiko’s mother-in-law, played by Takahata Atsuko, truly seems to be a monster in human guise.

Asked how it was acting together, Toda admitted, amid general laughter, “It was a rather painful experience, and we couldn’t wait for it to be over.”

Said Nagano on a more serious note, “I learned so much from Ms. Toda, she was always bright on set. We worked together for 6 months, and we shared a lot during that time.”

Hiroki expressed his own enthusiasm for the process: “I had such wonderful actresses that I felt just like a conductor, conducting an orchestra. They produced all sorts of sounds, and I enjoyed listening.”

Prodded to say more about her role as a mother who can’t quite locate her maternal instinct, Toda admitted, “This is the first role I’ve ever had that I couldn’t be objective about. At the press conference this morning, they were asking me about it and I realized that I was able to view at it only from Rumiko’s perspective. I found it difficult to express my own.”

“I think you have to be a mother to fully understand it,” she continued, “While we were making it, I thought back about my own parents and our relationship when I was a child. Between Rumiko and Sayaka, there was probably love but it never seems quite right.”

Nagano said, “My character is very complex, she wants to please her mother and earn her love, but it just doesn’t work out. I could identify with that because I think it’s a universal feeling.”

As the mother-in-law, Takahata, who’s currently playing a popular grandmother on a Japanese TV series, pampers her own daughter but is unrelentingly harsh to her daughter-in-law. “I loved the novel,” she said, when asked why she’d taken the role. “But also, I was seeking answers and the opportunity really appealed to me. It’s interesting how ‘motherhood’ means different things to different people.”

Toda marveled at Takahata’s versatility, noting, “Every scene we did together was so much fun because I’d imagined how she would play it while reading the script, but she always surpassed my expectations.”

Yamashita agreed. “I felt Ms. Takahata was like a fish in water. Her performance really moved me. She was very friendly during takes and it almost felt like she was my mother. Ms. Nagano and I bonded quickly because she also loves cars and motorbikes. I worked with Mr. Hiroki 15 years ago and he mentioned that he was hands-off during the process of making this film, but I guess maybe I got the most notes from him.”

Prompted for final words, the conductor of this melodious ensemble mentioned the film’s opening day in Japan, and told viewers, “I think this is the type of film that will be thought-provoking, and I hope you’ll want to see it again when it’s released in November.”

Motherhood opens on November 23 in Japan.