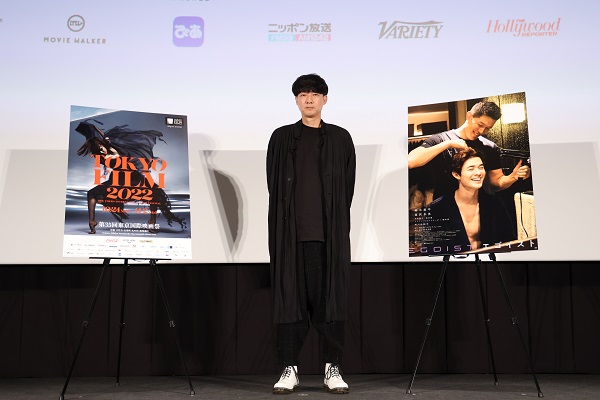 Matsunaga Daishi marks a welcome return to the Tokyo International Film Festival with his first Competition title, Egoist, a profoundly moving story of romantic and filial love with some very lusty sex. The film had its world premiere on October 27, and the director was met by sustained applause when he took the stage for the Q&A session following the screening.

TIFF Programming Director Ichiyama Shozo, moderating the session, recalled, “I first saw Mr. Matsunaga’s short film, sponsored by VIPO, some years ago, and I realized right away how talented he was. All his films are excellent in their own way, but I thought Egoist was particularly powerful. I’m really pleased to include the film in Competition and to welcome him here today.”

Based on the semi-autobiographical novel by Takayama Makoto, Egoist tells the story of a wealthy fashion magazine editor, Kosuke (Suzuki Ryohei), who falls for his new personal trainer, Ryuta (Miyazawa Hio). His affection is hesitantly returned, and the two bask in each other’s considerable glow. Ryuta juggles a number of jobs to support his doting single mother, Taeko (Agawa Sawako), who warmly welcomes Kosuke to dinner one night, not letting on that she understands he might be more than a friend. Kosuke’s mother died when he was young, and Taeko’s maternal attention seems like balm for his lonely soul. But tragedy is on the horizon.

Despite tugging at the heartstrings, Egoist is told with delicacy and naturalism, and completely sidesteps melodrama in its beautifully humanist depiction of LGBTQ+ relationships. It also features two of Japan’s hottest stars, Suzuki Ryohei (Tokyo Tribe, Last of the Wolves) and Miyazawa Hio (Edmund Yeo’s Moonlight Shadow) in explicit sex scenes.

Asked about the genesis of the project, Matsunaga responded, “The film’s producer, Akashi Naomi, showed me the original novel, and it came with a screenplay [by Inukai Kyoko] attached. The theme of sexuality appealed to me, but there’s also the theme of family. There’s a scene at the end of the film, where Kosuke says to Taeko, ‘I don’t know what love is,’ and she responds, ‘Even if you don’t know what it is, if the recipient feels like it’s love, then it is.’ That’s when I knew I just had to make the film.”

Since the casting is so crucial, several questions were directed at Matsunaga’s process and approach to working his actors. “Every time I do a film, I start by talking with the producer about casting,” Matsunaga told the audience. “We both agreed that the two leads were perfectly balanced. Casting is not about pulling out something from an actor that doesn’t exist inside him. I met Suzuki Ryohei long before he was an actor, long before I became a director. I knew what he was really like, and I knew he had it in him to become Kosuke.”

Nevertheless, he admitted that he prioritized rehearsals, and also worked with an LGBTQ+ inclusive director and an intimacy coordinator. “Before I start shooting, I always spend a lot of time on rehearsals,” he said. “We do scenes that come before or after the film’s scenes, like practicing etudes. This is my 10th year since my directorial debut, so I poured all my experiences into this film. We added about a quarter of the film you see to the original script, through the process of improvisation. I would give the actors keywords, and they would improvise from there.”

Matsunaga made his directorial debut with the documentary Pyuupiru 2001-2008 (2011), about his transgender performance-artist friend, and it premiered at the Rotterdam International Film Festival. His first narrative feature, Piéta in the Toilet (2015), won the Japan Directors Guild Newcomer Award and played in TIFF’s Japanese Cinema Splash section as well as many international festivals. He has continued to alternate between documentary and fiction, indie and commercial films.

On his documentary work, he operates the camera himself. When asked about the many closeups in Egoist, the director said, “The reason for the closeups is that I wanted audiences to take a more subjective view of the characters, to feel a greater sense of intimacy with them. I wanted to convey the things you don’t see on screen with sounds and encourage the audience to use their imagination. There’s a scene toward the end of the film, where Kosuke’s buying a bottle of water from a vending machine, but the camera stays on his face the entire time. I tried to convey what he was doing through the audio.

“Before we started filming, I had a lot of discussions with the director of photography. I had to consider the schedule and the budget, so I asked all the crew to watch the Dardenne brothers’ A Son. I always shoot my own documentaries, and I wanted to have my cinematographer shoot [handheld style] with one scene, one cut. So I reassured him that he didn’t have to shoot everything in each scene.”

Egoist will be opening in Japan next February 10, as well as traveling widely on the festival circuit.