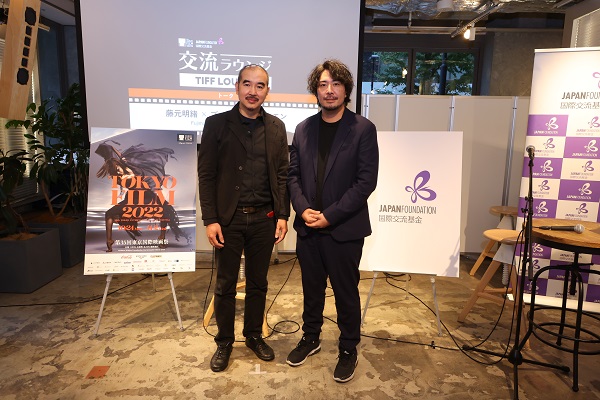 The third year of the TIFF Lounge (previously the Asia Lounge) got underway at the Yurakucho micro Food & Idea Market on October 25, the second day of the 35th Tokyo International Film Festival (TIFF).

Co-presented by the Japan Foundation and TIFF, with an advisory panel once again headed by Palme d’Or winner Kore-eda Hirokazu, the series brings together acclaimed filmmakers from Asia and beyond to engage in friendly dialogue with their Japanese counterparts on a handful of afternoons during the festival.

Bui’s debut film, Adrift, won the FIPRESCI award in the Orrizonti section of the Venice Film Festival in 2009, among other accolades. His fourth film, Glorious Ashes, marks his first new work in a decade, and is the first-ever film from Vietnam to be selected for TIFF’s Competition strand.

Fujimoto’s debut feature, the Japan-Myanmar coproduction Passage of Life, won the Spirit of Asia Award and Best Asian Future Film at the 2017 Tokyo International Film Festival, as well as further honors on the festival circuit. His 2020 Along the Sea, about the plight of Vietnamese “technical trainees” in Japan, world premiered in the New Directors competition at the San Sebastian Film Festival and went on to great acclaim. Earlier this year, Fujimoto received the vaunted Oshima Prize (named for Oshima Nagisa) from the Pia Film Festival for his focus on the lives of the marginalized in Japan.

In opening remarks, Bui said, “I was very moved when I saw Along the Sea. I thought your story of three Vietnamese women in Japan had something really big to share with us.”

Fujimoto returned the compliment: “I just saw Glorious Ashes and as a Japanese, I felt a great deal of empathy with it. For those who have seen Mr. Bui’s work, I think you’ll probably grin at the first scene. Adrift and Glorious Ashes both start with wedding receptions, which act as the beginnings of ensemble stories.”

Bui himself grinned. “To be honest, when I was writing the script, there was a lot of backstory, and at first there was talk about not having the wedding scene because it would be the same as in the previous film. But I knew that it was necessary, so we had to have it. I thought I could hide the resemblance a little by including a flashback scene at the beginning of the film, but Mr. Fujimoto caught me and the truth has been revealed.”

Then he admitted, “When I shot that scene, I could barely remember the previous film. It took me 12 years to make this film, and I hadn’t made a film in 10 years.”

Fujimoto noted, “I heard that it took you 5 years to shoot the film and you also spent a lot of time on the screenplay.”

“There’s a novelist in Vietnam, Nguyễn Ngọc Tư, who wrote the original story, and she’s known for writing very short stories,” said Bui. “However, her language is expansive. Her characters are vivid and have strong personalities. So when I made the film, I paid attention to that. They’re very special and their love for each other is very deep. These women live in a very simple and humble place by the river in the Mekong Delta, but their love lives are complicated, and I thought they reflected the society we live in now.”

Returning to Fujimoto’s Along the Sea, Bui commented, “As I watched the film, I could understand your feelings toward those who are in a vulnerable position in society. I also thought your access to your subjects, or rather, the way you filmed them, was very good, because you depicted the reality of people living and working in Japan.”

“How did you become interested in Vietnamese female technical interns living in Japan? There are so many Vietnamese going abroad to work as migrant workers, and some years ago I saw statistics that Vietnam has the second largest number of such workers in the world, after Poland.”

The Japanese director responded, “My main motivation was real-life incidents. There were so many cases of technical trainees, foreign students and Vietnamese people choosing to have abortions in order to continue working in Japan. Individuals are treated as laborers, rather than human beings, when they come to Japan. When I saw the struggles and tragedies that were occurring, I felt a great sense of fear for my own family, including my wife, who also came to Japan [from Myanmar] to support her family. We shared the same sympathies and the same sense of fear, and that’s what inspired me to create the film.”

Said Bui, “I heard you went to Vietnam to audition actors, and the ones you chose were not professionals or famous. Was that because you wanted to give the film a certain authenticity? Or did you take this difficult path because you didn’t have a big budget?”

Fujimoto shook his head. “I’ve never been too concerned about whether an actor is a professional. I believe that acting is a common language for all human beings since our childhood. It’s not about how good or bad you are at acting, but about the story, how your life path matches up with the story. I met three women who gave me clear reasons why they had to be in the film.”

Praising Bui for the acting skills of the ensemble cast in Glorious Ashes, Fujimoto asked about his own casting process.

“Just as I think the most important thing when writing a script is the characters, I think the most important thing in filming is the actors, and I put all my energy into casting them. I agree that it’s not so important whether they’re professional actors, but they must fit the story or have a background that fits the story. The main character, a girl named Hau (Bao Ngoc Doling), was only 13 years old when I cast her. Five years later, we finally started filming. It’s hard to say why, but I just felt she was the right person for the role. Sometimes when you search for actors, you have moments like that.”

He also mentioned, “If the budget allows, I have the actors go and live for a while in the shooting location, and live as the characters. I think it’s very important to do this before shooting. I was really lucky, because my actors even took time off from work to go to such a distant, really remote place and live there. I really want to thank them for that. I think that’s what made this film come alive so vividly.”

Fujimoto turned to a shared theme between both films: water. “It seems that water and the sea are just as important to you as the actors. Most films that address love have a high percentage of ocean or water in them, and Along the Sea qualifies as well. In your film, there are scenes where the water and the people seem to be melting together, as if they were the original human landscape. I was very moved by that last night.”

Said Bui, “I think Japan and Vietnam have long coastlines in common. For me, water is very much connected to sentiment. It is also lyricism, affection, and sexual desire. In Glorious Ashes, water represents the flow, the essence of human nature. When something goes wrong in a person’s life, they sink into the water, and by sinking, they find themselves.”

Moderator Ishizaka Kenji, TIFF Senior Programmer, asked the directors whether they saw any opportunities to promote exchanges between the Japanese and Vietnamese film industries.

Fujimoto responded, “As a fan, I would like to see a Vietnamese film set in Japan. I feel that Mr. Bui has a way of looking at things that isn’t defined by nationality or borders, so whether it’s set in Japan or Vietnam, it will be a film with your unique vision.”

“I really hope to be able to make a film in Japan,” said the Vietnamese director. “But I would like to ask Mr. Fujimoto to continue bringing his fresh perspective on Vietnam to more films, either in Vietnam or in Japan. Now that we’ve opened this line of communication, I hope we can work together in the future.”