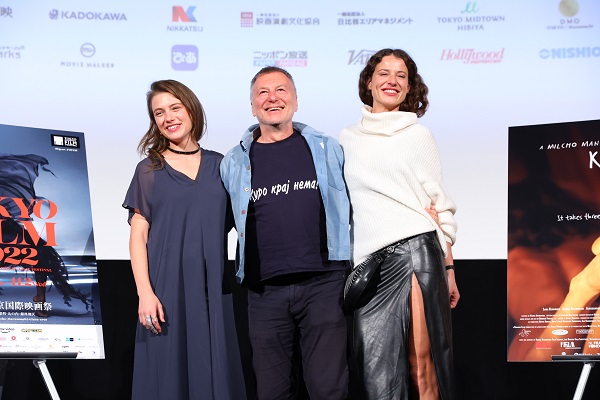 The Macedonian director Milcho Manchevski, recipient of numerous international awards, including an Oscar nomination for Before the Rain (1994), has contributed a modern sex comedy to the Competition section of the 35th Tokyo International Film Festival. Appearing at a Q&A session following the world premiere of Kaymak on October 26, Manchevski told the audience, “In the beginning, my purpose was to tell a love story for grownups. I was tired of syrupy Hollywood productions where boy meets girl and they live happily ever after.”

The film presents two households living in an apartment building in a cramped neighborhood of a large city. One contains a nouveau riche couple living above the fray and looking down on the other, a working-class couple who barely get by on their combined incomes. Eva (Kamka Tocinovski), who likes to smoke and tap away at her iPad on her glass-enclosed balcony, often tosses her cigarette butts into the street-level courtyard of her lower neighbor, Danche (Simona Spirovska), who invariably curses her to high heavens.

However, each household is eventually augmented by a third female member. In the case of Eva and her long-haired pharmacist husband, Metodi (Filip Trajkovikj), it’s Dosta (Sara Klimoska), an uneducated and barely articulate girl from Eva’s hometown who is brought to the city to produce a child for Metodi, since Eva, fearing how she would look pregnant, refuses to bear one herself. In the case of Danche and her older, decidedly unreliable husband Caramba (Aleksandar Mikic), it’s market stall keeper Violetka (Ana Stojanovska), a free spirit whose afternoon affair with Caramba is discovered by Danche and thus turned into a threesome that slowly sees Caramba become redundant.

Said Manchevski, “The idea was to tell it like it is, to talk about situations that the middle class in us wants to show to the world. It’s about what happens behind closed doors to reveal the hypocrisy, but ultimately, it’s mainly about how people love in different ways.”

Moderator Ichiyama Shozo, TIFF Programming Director, asked the two actors in attendance, Klimoska and Stojanovska, what they thought when they first read such an unusual script. “I’ve worked with Milcho before,” said Klimoska, “and I was surprised that he had written a comedy. While reading the dialogue I found it hilarious—it’s really difficult to make a genuine comedy, I think.”

For her part, Stojanovska said she was intrigued by how Manchevski showed “both sides of the situation. I really enjoyed exploring that part of the double theme.”

One audience member was intrigued by the frankness of the sex scenes, which, while not necessarily graphic, demonstrated a freedom that was refreshingly non-prurient. “I was nervous before we shot any of those scenes,” said Manchevski, “and actually, jealous of how the ladies were not nervous. But once you get over that hump—excuse the expression—you try to get to the essence of what those scenes really mean.”

He elaborated on this idea by describing a moment when Caramba wakes up with his wife and his lover having sex in the bed next to him. “That scene was about the tenderness between the two women and the loneliness of the man.”

As if to drive home the point that the women in the movie were less uptight about the sex than the men were, Stojanovska playfully added, “When we shot those scenes it was the middle of summer and really hot, so being without costumes, naked, was kind of a relief.”

Inevitably, someone asked about the title, which describes a sticky confection that keeps appearing in the movie, sometimes as a sexual aid and other times as a simple dessert. Responded the director, “Kaymak can be translated as ‘cream,’ as in the best part of something. The movie is really about people who try to get their own piece of happiness as best they can.”