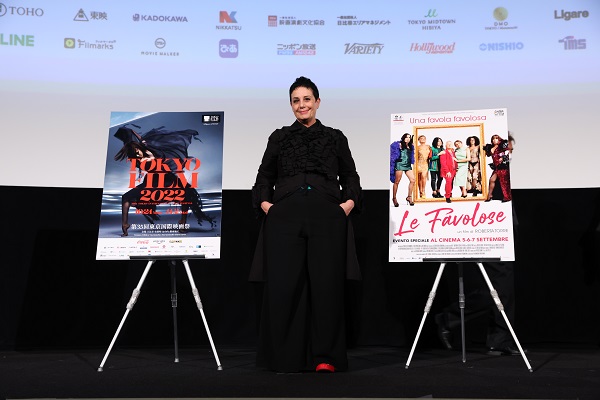 The Fabulous Ones had its international premiere in the Competition section of the 35th Tokyo International Film Festival on October 26. Following the screening, Italian director Roberta Torre appeared at a Q&A session to discuss the comical tale of five transgender women, who have gathered together to fulfill the wish of their late friend, who had been buried in male attire against her will.

Such a simple premise is welcomingly portrayed to a certain extent, but because the narrative is also motivated by the historical urgency of archiving how transgender characters and performers lived through turbulent times, the film reveals itself to be a fantastical exploration of past and present. With a touch of magical realism, The Fabulous Ones attempts to make sense of the hardships and legacy of transgender life while exploring the possibilities beyond the limitations of body, age and even life itself.

Torre spoke first about how the project came about. “The starting point for me was reading books written by Porpora [the transgender activist Porpora Marcasciano, who takes a leading role in the film]. She has written many books over the years. Her works are considerably well-written regarding transgender activism in the 1970s and I wanted to make a film about that.”

Upon the production of The Fabulous Ones, support from Marcasciano was indispensable. “I asked Porpora about casting, who should play the other roles. She introduced me to her seven friends, with whom she shared a wonderful time together back in the 1970s,” said the director. “Because of COVID-19, however, we were not able to physically get together. We contacted each other through Zoom and built the characters together.”

What is particularly striking about The Fabulous Ones is the combination of different image types, including documentary-like footage and video shot on Super 8. Such a diversity in images is supported by the specific strategies of the filmmaker to combine reality and fantasy: “Super 8 was used for the shots that are related to one’s memory. Images with low resolution can give an impression of going back to the past.”

Despite being a fictional film, Torre’s exploration of memory and experience challenges the simple dichotomy of fiction and documentary. According to the director, “It was my intention to include documentary as well as fiction. For the fiction parts, I prepared a script with dialogue. Having said that, I don’t necessarily believe that documentary and fiction can be completely separated. Film is a medium with multiple languages that can be freely used to express feelings. Through these means, I was able to add different elements to the story.”

Torre, who also served as her own editor, seems to have struggled with finding the right balance between documentary and fiction, reality and fantasy: “Spending six months on the editing, I was able to find a ‘red thread’ that connects each one of the elements. When all the parts were connected, it meant the completion of the film.”

One essential aspect of The Fabulous Ones is the beauty of the costumes, which match the personality of the colorful characters. “I did a lot of research into costumes for each character. I started out asking each cast member to bring their own wardrobe of things they used to wear in the 70s and 80s,” said the director. “Afterwards we went to a shop in Siena, looking for vintage costumes.”

Torre stressed the power of the dramatization of history as a means to ignite social change: “It can be said that this is a historical and humane story about the lives of people who diverge from the mainstream of Italian society.”