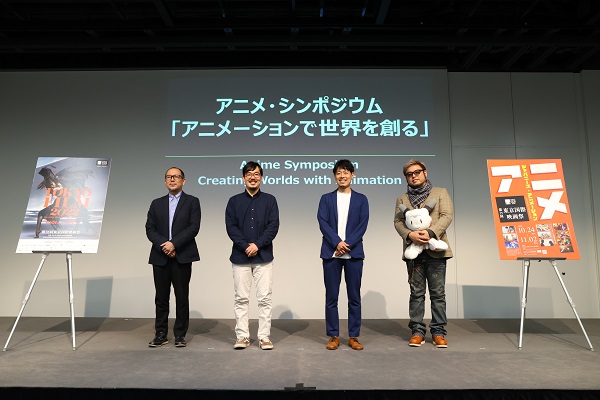 Three noted Japanese directors of animated feature films joined Tokyo International Film Festival’s Fujitsu Ryota, Japanese Animation Section Programming Advisor, on stage October 25 for a wide-ranging symposium entitled Creating Worlds with Animation. The men discussed their latest films, all of which are playing at this year’s festival, as well as the medium itself.

Ishida Hiroyasu (Drifting Home), Taguchi Tomohisa (The Tunnel to Summer, the Exit of Goodbyes) and Kurokawa Tomoyuki (Break of Dawn) have each released their new films in Japan this year and seen them do well at the box office. Fujitsu pointed out that they share a number of connections, thematic and otherwise. For one thing, each of the films uses water as a key motif.

In The Tunnel to Summer, the Exit of Goodbyes—a tale about two young students and a mysterious time travel-enabling tunnel—water is used primarily for its reflective qualities. One of the themes of the film, Taguchi explained, is facing one’s self, and reflective water was used in place of mirrors to help bring that theme to life visually.

“The characters are in the midst of puberty, a time when you don’t really want to look at yourself,” said the director. “But the reflections force them to.”

Meanwhile, Break of Dawn director Kurokawa detailed the creation of the water planet from his science fiction film, explaining he wanted it to look like nothing the audience had ever seen.

“If I’d used touchstones like Dune or 2001, it would’ve just ended up looking like a copy,” said Kurokawa. “Instead, I just offered some vague suggestions and gave the illustrator a lot of freedom.”

By pure volume, Ishida’s Drifting Home—which takes place in an apartment building floating on the ocean—probably features the most water.

“In many scenes, 90 percent of the screen was filled by water,” said Ishida. “We used CG for some of it, but for scenes where the water was splashing, etc., we used traditional hand-drawn animation.”

The most obvious connection between two of the films (Drifting Home and Break of Dawn) is that both take place in and around danchi, the block apartments that sprouted up in 1960s Japan to accommodate a growing population and the rise of the nuclear family.

Directors Ishida and Kurokawa had a laugh about the coincidence, comparing the overlap between their two films with 1998’s back-to-back releases of Deep Impact and Armageddon, two other films with similar elements.

“I was surprised when Drifting Home was announced, but we were already deep in production, so there wasn’t much to be done,” said Kurokawa. “In the end, we became ‘danchi friends,’ and I think it helped both films get more press!”

Ishida agreed, saying it was fun to compare and contrast how the two films portrayed these classic Japanese dwellings.

Both The Tunnel to Summer, the Exit of Goodbyes and Break of Dawn are based on existing source material—the former a novel and the latter a manga—and directors Taguchi and Kurokawa shared stories about how they pared down the originals to fit a film-length runtime.

“The Break of Dawn manga is only two volumes long, so I thought we could fit everything in, but that quickly turned out not to be the case,” said Kurokawa. He explained that rather than cutting out any secondary characters, he made sure each of their side stories fed into the main backbone of the film.

Taguchi took a different approach, cutting many characters in favor of concentrating on his two juvenile protagonists.

“There was a lot more interaction with classmates and parents in the novel, but we decided to really make it a ‘youth’ film, so we pared it down to the two leads,” Taguchi explained. “The novel is written in first person, and while films are inevitably third person to an extent, I wanted the film to be from the perspective of the lead to the greatest extent possible.”

The directors concluded their discussion with some thoughts about the meaning of the medium of animation itself.

“In live-action filmmaking, you have the power of coincidence,” explained Kurokawa. “The weather might change, the sun might start shining. But in anime, everything is under your control. If you don’t move, nothing will happen.”

Nodding vigorously, Taguchi and Ishida agreed that that element of animation is what makes it both exciting and, at times, overwhelming.

“For us directors, sitting down to draw storyboards can be a challenge,” said Ishida. “It’s literally a blank page. Sometimes you wonder if you’ll ever be able to pull it off.”

While live-action and animation have their differences, Taguchi noted that both are collaborative artforms and success often comes down to how well a director can impart their vision to the cast and crew.

“It’s a daily struggle,” agreed Ishida. “I think of animation as high risk, high return. When it works, it really works, and I’m reminded why I fell in love with it in the first place.”