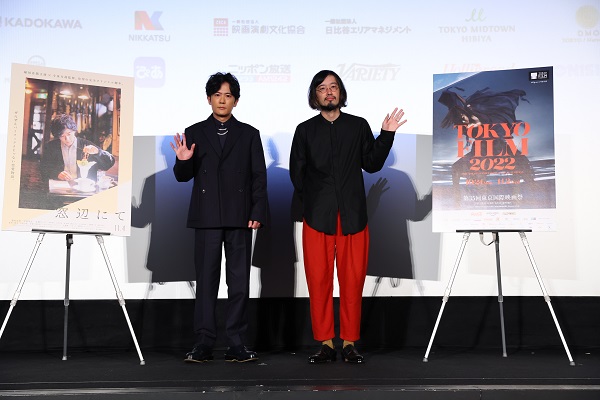 Prolific Japanese director Imaizumi Rikiya returned to the International Competition section of the Tokyo International Film Festival (TIFF) for the second time on October 26, with the packed world premiere of his 17th feature (yes, you read that right), by the window. He was joined onstage for a Q&A session after the screening by megastar Inagaki Goro (Another World), who plays the film’s protagonist.

Imaizumi, who made his film debut in 2010, had screened several titles in the Japanese Splash section of TIFF before being selected for the 2018 Competition with Just Only Love. At TIFF that year, he ran into Inagaki, who was there with Another World.

“I was a fan of the director’s work, and I was really happy to meet him,” recalled Inagaki. Later, he spoke to Imaizumi for a cinema column he writes in a local magazine. During their discussion, the director remembers the actor asking, “If you were to make a film with me, what type of role would you want me to play? But I wasn’t ready with an answer, so I had to mumble my way through it.”

But the collaboration had begun, and sometime afterward, Imaizumi sent Inagaki a script. “When I first read it, I felt it was very much an Imaizumi film,” Inagaki told the rapt audience. “He adapts stories but also writes original stories. This one was very much in his own words, and since he had me in mind while writing it, I could see what he wanted from me.”

Imaizumi commented, “Before I worked with him on this film, I’d only seen him on TV. My image of him is that he’s a calm, unemotional person. So I thought he would understand the dilemma that the protagonist has.”

The audience was invited to raise their hands if they agreed the role fit Inagaki to a T. Many hands shot up. “He even had my way of speaking down,” he marveled.

In the film, Inagaki plays Shigemi, a writer whose busy editor wife (Nakamura Yuri) is cheating on him. The fact that he isn’t shocked by comes as a shock to him, and he discusses his reaction with friends and strangers alike, wondering whether has lack of emotion is acceptable.

After finding himself intrigued by the protagonist of an award-winning novel, he begins a self-reflective journey with the book’s 17-year-old award winner, Rua (Tamashiro Tina) — but fortunately, it does not go at all where one fears it may. The film is more concerned with how people achieve a balance between love and honesty, and with reminding us how important it is to take the time to talk and really listen to each other. “I know what it’s like to want something and despite all my efforts, not to get it,” Shigemi tells Rua. “But your protagonist gets everything he wants and throws it all away. I wondered why. It made me angry.” Yet his anger is just as understated as the lower-case font in by the window. Big, messy emotions are not welcome here.

Commenting on the writing, which is slightly more stylized than usual, the director said “If the lines are too stylized or drift away from reality, I always try to make them more colloquial so it feels natural. But because Mr. Inagaki is playing a writer, I thought the lines could be more [carefully crafted]. Behind his lines, I think you can feel all those years of Mr. Inagaki’s experience in SMAP.”

Inagaki countered, “I didn’t realize Mr. Imaizumi was thinking I was drawing from my past experiences, but I did think I could relate to the character. I thought maybe I would also not be as depressed as one might expect in a situation like that. And I must say that one of the charming things about the character is that he genuinely wants others to be happy. I really liked that about him.”

Asked by an audience member about his preparation for the role, the actor said, “I didn’t do so much, since it felt as if Mr. Imaizumi had looked into my soul and really understood me when creating the character. So I thought I would just be myself naturally. He eschews overacting, so I was also tuning into his style. As an actor, it was a great experience.”

Imaizumi summarized his storytelling aims this way: “Having an affair is supposed to be very bad, but in the film, they’re having fun. They’re talking about guilt, and the situation is very one-sided for the spouse that’s having the affair. But it’s difficult to say it’s bad or evil. Also, people think that it’s not good when others ‘give up,’ like the athlete [a character in the film] who plans to quit. But maybe it’s actually fine for moving on to the next step.

“Often, it’s easier to take subjects like ‘empathy’ when creating certain themes. But this film focuses on small troubles. Although there are much bigger troubles in the world, I wanted to look into these smaller dilemmas because when we face them, they can be very big, and they can sometimes even kill us.”

by the window opens on November 4 in Japan and international festival screenings are sure to follow.