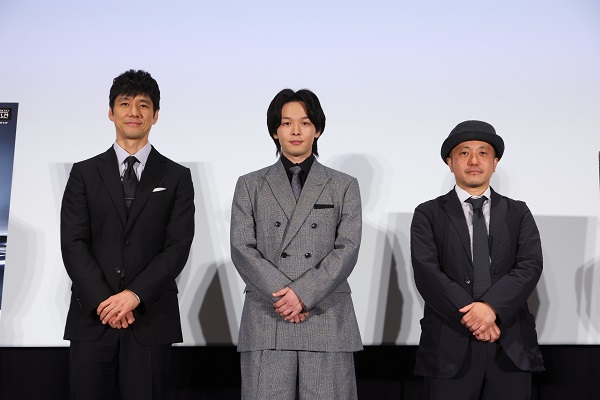 The excitement was palpable at the world premiere of “KAMEN RIDER BLACK SUN,” playing on October 25 in the TIFF Series section of the 35th Tokyo International Film Festival, which highlights examples of outstanding TV and streaming series.

An audience spanning several generations had gathered to get a first look at the much-anticipated reboot of the 1987 TV show “MASKED RIDER BLACK.” The new series was created as part of the Masked (Kamen) Rider 50th Anniversary Project to mark the show’s 35th anniversary.

First launched in 1971, the Kamen Rider series introduced the world to the motorcycle-riding superhero in insect-inspired fashion who fights kaijin supervillains. Created by manga artist Shotaro Ishinomori, its popularity went on to spawn tokusatsu TV programs, films, manga and anime, and to launch the careers of many of today’s biggest stars.

Each series focused on a different Rider, a new set of characters and new storylines, although many characters crossed over and many Kamen Riders have teamed up against a common foe.

With so much history, how then to mark the milestone this year and to keep the franchise fresh? Why, what better way than to hire Shiraishi Kazuya to completely reboot the series? Not surprisingly, given his propensity for onscreen violence, Shiraishi (The Devil’s Path, Twisted Justice, The Blood of Wolves, Lesson in Murder) has produced what looks to be, from the first two episodes shown at TIFF, a boldly reimagined origin story.

He stages thrilling human-to-kaijin transformations and gruesome battles, but more importantly, he sets all the exciting action and special-effects work against a backdrop that is socially and politically relevant. Taking place 50 years after kaijin and humans began coexisting, the new series presents a dark and disturbing reflection of our world today, with virulent discrimination against the kaijin and corrupt politicians out for their own personal gain.

At a stage appearance preceding the screening of “KAMEN RIDER BLACK SUN,” the director and his stars, Nishijima Hidetoshi (playing Minami Kotaro/BLACK SUN) and Nakamura Tomoya (Akizuki Nobuhiko/SHADOW MOON), discussed, amid a lot of joyful giggling, their involvement.

Audiences may be surprised to see indie icon Nishijima (Drive My Car) in such mainstream fare, but the actor admitted, “I just turned 51 and this is the 50th anniversary of Kamen Rider. To be involved in this reboot is a great honor as well as a lot of pressure. I always wanted to be in the series, but at my age, I thought I could only play villain roles. So when I was asked to be BLACK SUN, I couldn’t resist.”

Although this version is rated R18, so his sons can’t watch it, Nishijima promised that he would “return all the money I’ve earned on it if you could also make a kid-friendly version.”

Nakamura noted that he watched the Kamen Rider BLACK RX series in real time when it ran, “when I was about the age of 3, since I had an older brother. SHADOW MOON had a big impact on me, so I actually went to the producer to ask him for this part, since I was such a big admirer.”

Asked what he’d felt when he was first approached about directing the reboot, Shiraishi said, “I was quite surprised, but I was worried that if I turned down the offer, I’d never get another chance. I always wanted to do a special effects film, and I got to do a lot of things and create things that don’t exist in the real world, which is lots of fun. Because it’s sci-fi, I could also put a lot of messages into it.”

Noting that Nishijima and Nakamura play characters who are the same age in the film, despite the disparity in real life, the emcee asked the two whether it was a challenge. After they’d both laughed heartily, Nakamura responded, “It wasn’t a problem at all. I’ve worked with Mr. Nishijima many times in the past. I got to play the role of the young me with another actor, and then the older me with Mr. Nishijima, which was really interesting.”

The bigger problem, he admitted, was that “I had to be more charismatic than I actually am in real life, I’m more goofy than that, so that was a bit of a challenge.”

Shiraishi was asked about the series’ rating, and he said, “The offer was for me to create a ‘more mature’ Kamen Rider. I wanted to make something that adults and children could both enjoy, so I aimed for a PG12 rating. But after it was completed, we got an R18, so I have to apologize to the kids.”

No discussion would be complete without a mention of the characters’ insect suits, which Nishijima termed “much more biological” than previously. “The suit depicts the inner life of the character and gave me great inspiration into the role,” he said.

Agreed Nakamura, “I think the first thing that convinced me of the world that we’re depicting was the suit.”

Nishijima urged the audience to watch the entire series. “It’s filled with a lot of drama and social themes. I hope you’ll become cheerleaders for the series and spread the word.”

Added Nakamura: “It’s difficult to tell what this genre is. One of the trailers called it a ‘kaijin ensemble genre.’ But whatever it is, I think fans and non-fans alike will enjoy it. Everyone in the audience, please tell 15 of your friends to watch.”

Concluded Shiraishi, “I want to thank TIFF because this 10-episode series was made to stream online, and I never thought it would be shown in a theater. This is the ideal way to see it, and I hope you’ll enjoy it.”