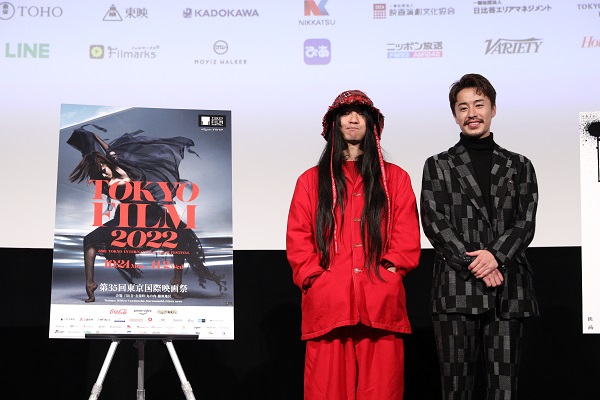 How do we go on living when the brightest light in our lives has suddenly been extinguished? How do we go on when we’re not sure what it all means? Those are the essential questions at the core of i ai, the colorful, restless film debut of celebrated alternative-rock musician MahiTo The People. The film received its world premiere on October 25 in the Asian Future section of the 35th Tokyo International Film Festival, attended by an audience that was no doubt familiar with the newly minted filmmaker’s previous creative output.

Prior to the screening, the director, his producer Yuji Hiratai, and star Tomita Kentaro took the stage to make brief remarks. Asked why he had chosen to make a feature-length film when he’d not made even a short film before, MahiTo explained, “I’ve met so many people and heard so many memorable words from them. In order to express the times we spent together, I feel like I was captured by this medium and just had to make this film.”

Tomita, who had been discovered through an audition process, related, “I was aware of MahiTo and when I saw the audition announcement, I was going through some personal struggles and felt as if he would help me. I felt so much love in his words.”

Hiratai recalled, “When I first read MahiTo’s script, I felt it was like a work of literature, really incredible. Even though it takes two years to make a film and is a really difficult process, I really wanted to get this made. We began before I’d gathered all the necessary funding. It’s such a great honor for us to premiere the film here in Japan, and I thank you for being the first audience.”

In i ai, an aimless young man named Kou (Tomita) meets the charismatic punk-rock star Hee Bro (Moriyama Mirai), and his boring life comes unstuck. He leaves the “colorless world” of work and embraces play, quickly bonding with Hee Bro’s happy-go-lucky entourage, which includes a devoted girlfriend, younger brother and two other wannabe band members. Hee Bro teaches Kou how to play the E-chord (“the great equalizer: you play it and all the darkness and doubts inside you come out and cut a hole in the wind”), and as the gang smokes, drinks, talks and slacks together, the world seems full of wonder.

But Hee Bro is nothing if not self-destructive, and there are visions of people in red, on skateboards and with umbrellas — surely they bode ill. After several run-ins with the yakuza, who seem to go way back with him, Hee Bro dies and his bereft followers must find reasons to go on without his galvanizing presence in their lives.

Once the applause had died down, MahiTo and Tomita returned to the stage for a Q&A session with Ishizaka Kenji, TIFF Senior Programmer.

“For the past three years or so I’ve spent my time trying to crystallize all my images into a little package called a film, the director told the audience. “Now I feel like it’s grown wings and taken flight.”

Ishizaka asked the director about the sea (located in Akashi, Hyogo Prefecture), which appears in many scenes and plays such an important role in the film. “The ocean connects us to the rest of the world,” MahiTo said. “When you want to get out of where you are or you want to go on to the next stage in life, at least for me, I’ve always looked at the ocean [for answers]. It’s complicated, with ebbs and flows, and sometimes you’re stuck there, just pondering it.

“When Mr. Moriyama first accepted the offer to play Hee Bro, we talked about how the sea embraces everything, death and life, clean and dirty, and it’s very healing. I’d like to think the film is also that way.”

Commended by a viewer for the beautiful clouds in a certain scene, MahiTo said, “Of course you’re at the mercy of the weather, you can’t direct it. You can’t control certain encounters or chance meetings with people, nor understand them logically, but during the course of making the film we felt blessed by the sea, the sky and the people in the town. In particular, for the scene where Kou cries in the rain, there was a typhoon that day. Maybe I was being rewarded for behaving properly.”

Asked how he had chosen Tomita for the role of Kou, the director responded, “Kou’s monologue at the end of the film expresses my feelings, and I didn’t want to entrust those words to someone who wouldn’t take the utmost care with them. There’s flesh and blood in those lines, and I didn’t want to cast someone who’s simply good at acting or is a popular actor. I wanted to choose someone I wanted to spend time with, to weave something together with in the future.”

Said Tomita, “I was so full of internal struggles, but because the producer and MahiTo gave me so much support, I was able to deal with them, to accept responsibility for my life. I feel so lucky and so happy that I came to play this role. Now I have the responsibility to return all that love and support I received.”

He added, “I was in the audience at the end of the film, and so many memories of the filming process came welling up, it really warmed my heart. The final line, ‘Let’s stay together even after the movie ends,’ made it feel like the world and the film were linked, and that we’ll be able to overcome our struggles and dilemmas together.”