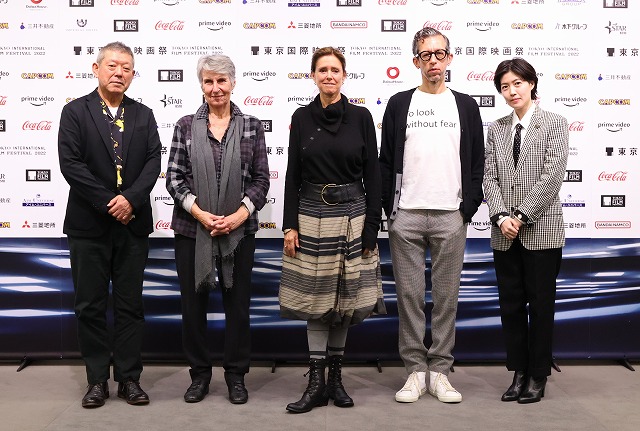 During the press conference to introduce the jury that would judge the International Competition selections at the 35th Tokyo International Film Festival, the five film professionals discussed how they will approach their task and what criteria they will use to make their decisions. But first, they all agreed that it was great to be back in theaters watching movies again, a sentiment that reflected on the past two-plus years of isolation and fear.

Marie-Christine de Navacelle, the former director of the Institut Français and a documentarist in her own right, made the starkest comment in this regard during her opening remarks. “In Europe, during COVID-19, we were not allowed to go to the movies, and that was terrible, so we stayed at home and watched Netflix.” In the meantime, she pointed out, filmmakers were still making films, albeit under more difficult circumstances, and the results of those efforts are now being seen around the world at film festivals.

The point de Navacelle was making is that the movies now emerging are unique in that they were produced during a period of great global anxiety, and she believes they will convey that anxiety in ways that are both enlightening and edifying.

Jury President Julie Taymor, whose expertise extends beyond film directing to theater production, elaborated on this idea in response to a question from a reporter. One of the purposes of the performing arts, she believes, is to heal. “Having created and directed [the stage production of] The Lion King for 22 years, in Japan and elsewhere, I have seen how the arts are a healing power—it is at the heart of what we do.” She then told a story about a woman in Australia with cancer who told her that her film version of the life of artist Frida Kahlo “gave her a new perspective on her own suffering, that the experience of watching someone else’s story gave her hope.”

Portuguese director João Pedro Rodrigues commented that “after about two years I am happy to be here for that experience, of being together in theaters.” What makes film art unique, he says, is that people as a group appreciate the “individuality” of a particular artist’s work at the same time, and, obviously, that can only be done when everyone is in the same space.

The other theme that emerged from the press conference was the members’ respective interactions with Japan as a film power, and how inspiring Japanese movies have been to them. Both Taymor and Rodrigues pointed to Kurosawa, Mizoguchi and other Japanese masters of the form as having a distinct influence on their work. For Taymor, Kurosawa has directly affected her various productions of Shakespeare, and de Navacelle related an amusing story of how the first time she came to Japan all she wanted to do was visit the place depicted in her favorite movie, Ozu’s Tokyo Story. She was disappointed when she went to Atami, not realizing that the place she really wanted to visit was elsewhere, in Onomichi. The Korean actor Shim Eun-kyung, the youngest member of the jury, related how Shunji Iwai’s All About Lily Chou-Chou changed her life as a junior high school student. “I never imagined at the time that such a movie could even exist,” she said. De Navacelle also explained the importance of the Yamagata International Film Festival in the development of her work not only as a documentary filmmaker but a festival director.

It thus fell to Japanese cinematographer Yanagijima Katsumi, who is best known for his work with director Kitano Takeshi, to address the issue at hand. “Film is a form of expression,” he said, “and you always have to think about how to make that expression interesting. Selecting the best from such a large number of films is very difficult, but I look forward to watching new movies and discussing them with the other jurors.”