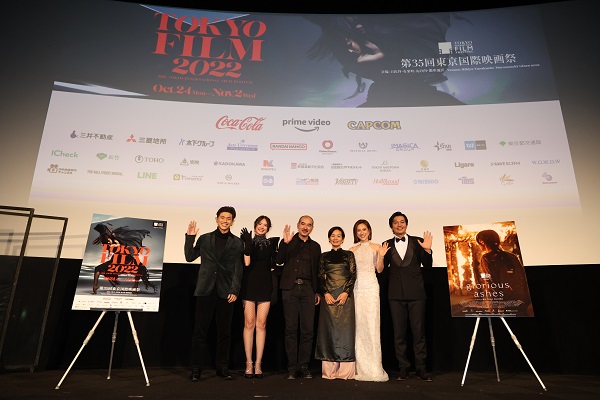 The first-ever film from Vietnam to be selected for the International Competition section of the Tokyo International Film Festival (TIFF) had its world premiere on October 24, the festival’s opening day. Audiences who had not already seen the film’s director, cast and crew members on the Red Carpet could be forgiven for being stunned by their appearance at the Q&A session following the screening.

After spending two mesmerizing hours watching Glorious Ashes, the intertwined stories of three women living harsh lives in a poor village in the Mekong Delta, it was indeed a jolt to see the film’s thoroughly modern young people as they took to the stage, clad in fashionable attire rather than the ragged clothing they had sported onscreen.

Glorious Ashes is the fourth feature by director Bui Thac Chuyen, whose debut, Adrift, won the FIPRESCI award in the Orrizonti section of the Venice Film Festival in 2009. Gorgeously photographed and almost ethnographic in the authenticity of its details, it is the enigmatic saga of two young wives with deadbeat husbands and an older woman who begins living with the man who had raped her at age 12 after he’s released from prison. Fire and water are repeated (and magnificently depicted) touchstones, and the patriarchal society’s gender inequalities receive a real trouncing.

Bui profusely thanked TIFF and told the audience, “I’m so happy to have been able to have the world premiere here in Tokyo. It’s such a glorious day for all of us, since the cast and crew members who are with me have just seen the finished film for the first time, together with you.”

Actor Le Cong Hoang echoed the director’s feelings of gratitude and noted, “It’s hard for me to see everyone’s expressions since you’re all wearing masks. Whatever your emotions are under there, I’m just happy you could be here to see the film, and I hope you felt as moved by it as we were.”

Actress Juliet Bao Ngoc Doling also expressed gratitude to TIFF as well as admitting she was proud of the director. “This is Mr. Bui’s first film in over a decade,” she said, “and he’s made such a wonderful, moving film. We’re all overwhelmed by the experience.” Her comments were echoed by actors Phuong Anh Dao and Ngo Quang Tuan, as well as producer Tran Thi Bich Ngoc.

TIFF Programming Director Ichiyama Shozo then asked Bui about the film’s genesis. The director said, “I first read this love story [by leading Vietnamese author Nguyen Ngoc Tu] six years ago. It’s a short story by a female writer living in southern Vietnam. I was very fond of the way she expressed love. I couldn’t get it out of my mind, so I decided to make a film about it.”

An audience member noted that the end credits mention the film is based on two short stories, and asked why the director had expanded on the first story. “After completing the script, I felt something was missing,” responded Bui. “The original idea was to focus on two women, but by adding another character, I was able to show the strength of each woman’s love more clearly. I spent two years writing the script and five years shooting it, so I often felt the day wouldn’t come that we could complete the film for everyone to watch.”

Fortunately, his long journey to reach audiences has ended, while the film’s has just begun.