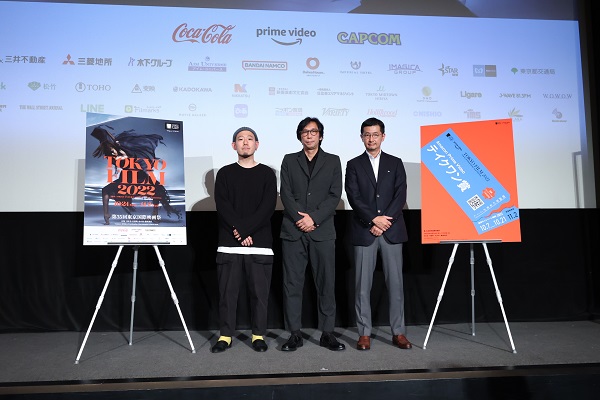 The 35th Tokyo International Film Festival (TIFF) got underway on the morning of October 24 with the first theatrical, English-subtitled screenings of the seven finalists in the Amazon Prime Video Take One Award short film competition.

The screenings highlighted how the festival is helping to cultivate emerging filmmakers. With leading streaming service Prime Video, which supports TIFF’s goal of discovering and nurturing new talent, the second year of the award had attracted 83 entries of under 15 minutes each from filmmakers living in Japan who had not yet made a commercial feature as director, writer or producer. This year’s finalists were also streamed on Prime Video’s social media in the weeks leading up to the festival, along with last year’s two winning titles.

The seven finalists were selected by a jury led once again by acclaimed director YUKISADA Isao (Go, Crying Out Love, in the Center of the World and Theatre: A Love Story). On TIFF’s Opening day, Yukisada joined KODAMA Takashi, Japan Country Director, Prime Video, and last year’s Amazon Prime Video Take One Award winner, KIM Yunsoo, to chat about this year’s award.

“I’ve been the head of the jury since the awards were inaugurated last year, which is a little unusual, but a huge honor for me,” Yukisada told the audience in opening remarks. “We spent 5 hours going back and forth before choosing the finalists for the award, but it’s always a period of great enjoyment for me.”

After expressing his pleasure about the second year of the initiative and the quality of the films this year, Kodama said, “Prime Video is supporting this with the goal of meeting new talent. Last year, Mr. Kim won the award and we’re currently developing a project with him, for which he will write the screenplay. We’re collaborating with many established filmmakers and are producing about 10 original films each year in Japan. But we’re also looking to work with new talent, and we encourage creators to participate. We feel this is something quite unique globally, and we’re grateful to TIFF for this opportunity.”

Kim, asked about the process of his collaboration with the streamer, responded, “I won the award last year and have had the opportunity to suggest several different projects to Prime Video. I’m so thankful that we’re now on the starting line with the project Mr. Kodama just mentioned. I used to make self-financed indie films, so there were no restrictions on what I was making. This was my first experience having to gain approval from someone else for my work, and I’m 60% excited and 40% terrified about continuing the process.”

Yukisada joked, “I’ve had a long career in the industry and have yet to be invited to develop a project with Amazon Studios myself.” (His 2020 film Theatre: A Love Story was simultaneously released in limited theaters and on Prime Video at the same time, reaching millions of viewers from over 240 countries around the world.) He continued, “But I think they’ve been working with many experienced directors and now they’re looking for fresh, vivid new films for the future. When we’re judging the films in the Take One competition, we’re thinking about the directors’ futures as feature filmmakers.”

Kodama stressed the importance of “the balance of veteran and new directors in our lineup, but working with emerging directors admittedly has greater risk. We want to help bring their talent to the world, but we also want Prime Video to be the Home for Talent, the first place to go for young and experienced filmmakers who have great ideas.”

While 80% of the submissions this year came from male directors, five of the seven finalists are female filmmakers (one of them just 14 years old). Yukisada commented, “These days, we see many more females in film crews, and it seems that they have more momentum, they’re more resilient and they’re more powerful than men. They’re telling stories from their unique point of view, and they’re focusing more on themes than males are. Perhaps we selected so many female directors this year because as males, we were surprised by their stories.”
Kodama confirmed the streamer’s commitment to discovering and nurturing new filmmakers. “We’d like to continue giving the Amazon Prime Video Take One Award for 10 years,” said Kodama. “So that requires us to work hard and make great films. This is a good mechanism for us, and we look forward to making a wonderful film with Mr. Kim.”

The Amazon Prime Video Take One Award finalists (in order of directors’ name) are: A World I See by ASUMI Momoha, Falling in Love with A# by HIROTA Kohei, House on the Ocean Floor by NAKAJIMA Shunsuke, Barefoot by TANOUE Hiromi, Calm Time by TSUNEISHI Rino, Specimens by WAKOH Yuhi, and The Refrigerator Thief by YO Enen.

The winner will be announced at the TIFF Closing Ceremony on November 2, and will receive a prize of 1 million yen from Prime Video, as well as the opportunity to develop a feature film with Amazon Studios.