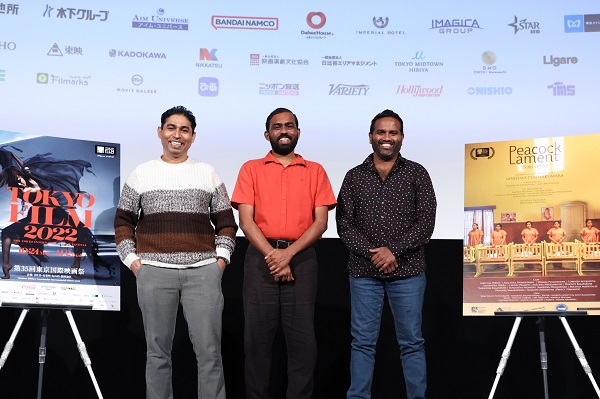 There’s nothing easy about making a film during a global pandemic, yet Sri Lankan filmmaker Sanjeewa Pushpakumara has managed to release not one, but two films in the last two years. A year after his 2021 film Asu was spotlighted in the Asian Future section of the Tokyo International Film Festival, Pushpakumara is now premiering his 2022 drama, Peacock Lament, in Competition.

It is the final title in a trilogy that includes his 2011 debut Flying Fish and his 2016 film Burning Birds. The story centers on a man from a small village in Sri Lanka called Amila (Akalanka Prabhashwara), who has become the primary caretaker of his five siblings following the death of his parents. Amila’s 12-year-old sister Inoka is in desperate need of heart surgery, so he moves to the city of Colombo to try and earn more money for his family. Amila is soon hired as a laborer, but finds himself in a difficult position when he learns that the company he works for is a child-trafficking operation that helps foreigners to adopt babies from unwanted pregnancies.

An audience member asked Pushpakumara about his style of composition and the use of symmetry in his frames. “Everything I learned, I learned from paintings,” the director said. “I have great admiration and respect for Alfred Sisley. He’s a British-born painter – an impressionist painter – who lived in Paris. Today, I went to the Artizon Museum (in Tokyo) and I was so glad to see one of his original paintings there.”

Wanting to know more about the inspiration for the film and its core themes, another viewer asked Pushpakumara whether his poignant exploration of life and death was influenced by Asian philosophy. Responded the director, “When a filmmaker makes films based on his or her own life, [a story] which is very dear to his heart and soul, if a film or any art piece is honest, I think it will touch you, no matter the country.”

Admitting he had poured his heart and soul into his latest feature, the filmmaker revealed that Peacock Lament is based on his own life and that Inoka’s character is named after his late sister, who passed away in 1996. “She’s in my heart until I die. I want her to live…so she lives in this film.”

When asked about whether he wanted to change the world through his films and what impact he thought Peacock Lament may have on audiences, Pushpakumara replied, “We all know that the world we are living in is not a good world to live in. It must change. To change the world, we need hope. To get hope, we need commitment, courage. In this film, you can see the courage and the passion the characters have to pursue their goals, no matter what kind of difficulties they are going through.”

Elaborating on his drive to inspire more hope through his films, Pushpakumara said, “I’m not an idiot. I know that art pieces can’t change the world, but art can change a person’s internal perceptions. That is what I’m trying to do.”