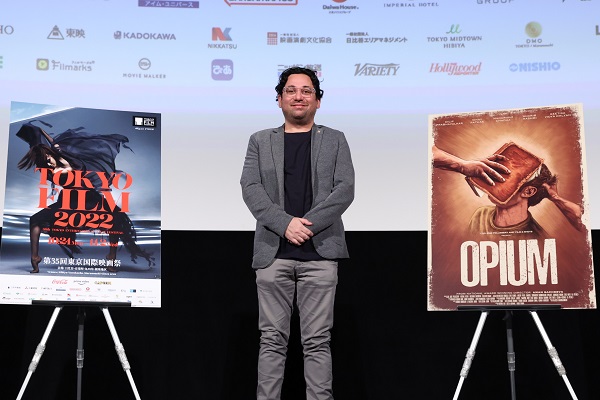 Indian director Arman Sachdeva’s omnibus feature, Opium, screening in the Asian Future section of the 35th Tokyo International Film Festival, is not about the titular drug, but rather refers to Karl Marx’s famous dictum about the nature of religion, which he called the “opiate of the masses.” In five concise, tonally diverse shorts, Sachdeva endeavors to explore the various ways that religion affects the collective and individual psyche; or at least how it does so in India.

Before a post-screening Q&A session on November 1, TIFF Senior Programmer Ishizaka Kenji conducted an informal survey of the audience, asking the assembled viewers which of the five segments they liked the most. According to Ishizaka’s assessment of the resulting applause, the audience found them all equally laudable.

“I think they’re being too kind,” the director told him, “but I am happy to accept that all the sequences were popular. I want to say that the idea of the sequencing was to start with the most negative story and end with the most positive.”

The opening chapter, “The Riot,” does pack the most dramatic punch, as it depicts a village battle between rival belief systems that results in the implied rape of a middle-aged woman. The centerpiece story is a comedy about a man who explores various religions to find the one that offers the least expensive funerals. The final section, “A Petal,” is a gentle affair, chronicling the search of a young boy for the cow dung in order to complete the ritual requirements for a Hindu wake.

Sachdeva admitted that this last episode was based on his own experience as a child growing up in the northern part of India, where cows didn’t normally roam the streets, making the task of dung collection all the more difficult.

One viewer and Indian film aficionado asked the director to describe his relationship with his producer, Lijo Jose Pellissery, a filmmaker in his own right.

“We’ve known each other for many years,” said Sachdeva, “and our relationship is like a bouncing ball. He is always giving me ideas, but it’s never an imposition on me. He makes his own films.”

The same questioner asked about Sachdeva’s own religious beliefs, to which he responded, “I’m not very religious, so I wouldn’t know how to describe myself. I have faith, but I think I’m an agnostic.”

Another viewer recognized the influence in the movie of Pakistani writer Saadat Hasan Manto, especially in the segments that dealt with Islam, including one about a female food delivery person who refuses to deliver an order that contains bacon. Sachdeva said, “I once made a film about Manto. If you read his stories, you can understand how he could have written this movie, especially his stories about the partition [of India], which were a huge influence on me.”

Perhaps the most cryptic segment was “The Blind,” a wordless fantasy about an unidentified cult that straps books to their faces. “That segment was a challenge because of the location,” said Sachdeva. The short takes place in a derelict housing project. “We had to look for a dilapidated apartment complex, and it was difficult to get permission from local authorities to shoot in them.” Permission to use the place that finally appeared in the film was refused twice before local authorities relented.

“My main idea for the film was to take a humanistic approach to religion,” the director said about his themes. “If it seems to be a political statement, that’s just how it came out.”