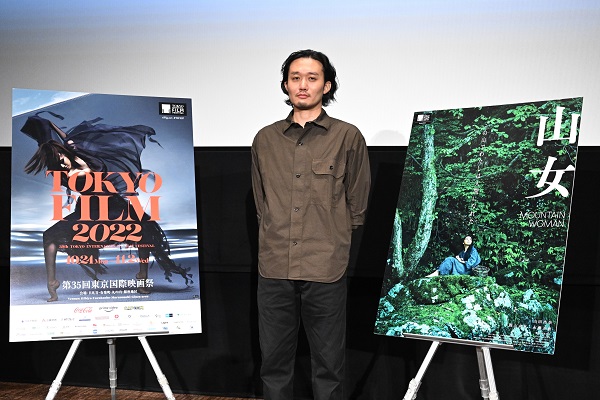 Japanese director Fukunaga Takeshi’s third feature, Mountain Woman, a World Premiere screening in the Competition section of the 35th Tokyo International Film Festival, goes deep into Japanese tradition, superstition and folklore. Appearing at a Q&A session following a screening on November 1, the director remarked that he was happy to talk about the film in order to “help you understand it better.”

Since the story is straightforward, the plot didn’t require any explanation; but Fukunaga knew that some viewers were uncertain about what he, as the director, wanted to communicate. “I spent many years overseas,” he explained, “and that caused me to reflect on my roots as a Japanese person, and what kind of country Japan is.” I thought I could discover the truth about how Japanese people lived in the past through Japanese folklore, and focused on the Tono folk stories, which are told in a realistic way.

“By making a film based on these stories, I felt I could discover something primal about Japan. While my version is not a precise rendering of these stories, I’ve taken elements and adapted them so that they’re relevant to our age right now.”

Mountain Woman is set in the late 18th century in a village in northeastern Japan that is suffering its second year of famine due to a cold snap. Newborn babies are discarded because they are simply extra mouths to feed, and the village elders rely on a seer to guide them out of their crisis. The main character, Rin (Yamada Anna), is the eldest daughter of the village’s most stigmatized family, owing to the fact that an ancestor had caused a destructive fire. Rin, her younger brother and her bitter, selfish father, Ihei (Nagase Masatoshi), do the village’s “dirty work,” because their land was taken away as punishment for the ancestor’s act.

When Ihei steals some rice, Rin takes the blame to protect him, and rather than suffer any more at the hands of her fellow villagers, she retreats to the forbidden realm of Mt. Hayachine, where the spirits of the locals go when they die. There she meets a mysterious figure who changes her way of thinking.

One audience member asked the director what he hoped modern audiences would take away from the film, to which Fukunaga replied, “I wrote the screenplay with Osada Ikue during the first stages of the COVID pandemic, and I thought at the time there was a lot of victim-blaming going on in Japan. I wanted to incorporate that into the story, which depicts the resilience of a person under harsh social circumstances and discrimination, and what they would do when pushed too far. In the end, I hope people who watch this film will become more thoughtful and considerate.”

Another viewer commented on the film’s dark look and wondered what it was meant to portray. “Nature is a central theme,” said Fukunaga. “I wanted nature to have a central presence in the film and that’s why I used natural light—to bring reality and texture to the story. I discussed this aspect with my cinematographer, Daniel Satinoff, and we used natural lighting not only in the daytime, but also at night, which is why the darkness is so black in the film.”

TIFF Senior Programmer Ishizaka Kenji, acting as moderator, commented that the blackness of the night scenes was “very impressive,” to which Fukunaga replied, “We had to show what kinds of lives these people led, what this world was to them and what they relied on spiritually. I wanted to show my reverence for that life, and Daniel did a great job in that regard.”

As for the actors, Fukunaga insisted that they all got the Tohoku dialect right, “because the atmosphere is really contained in their dialogue. It was actually my first time to work with professional, experienced actors, and my idea was to ground their performances in reality. It’s a period piece, but it has to show the truth of the issues at hand.”

When asked specifically about his lead actor, Yamada Anna, Fukunaga commented, “I chose her for her distinct facial features, which gave the character the kind of earthy quality I wanted, but also because she is basically a cheerful person. The character goes through many difficulties, so I thought I needed someone who could balance that out. As far as directing her, all I did was make sure she didn’t overact. Mainly I was there to support her throughout the film.”